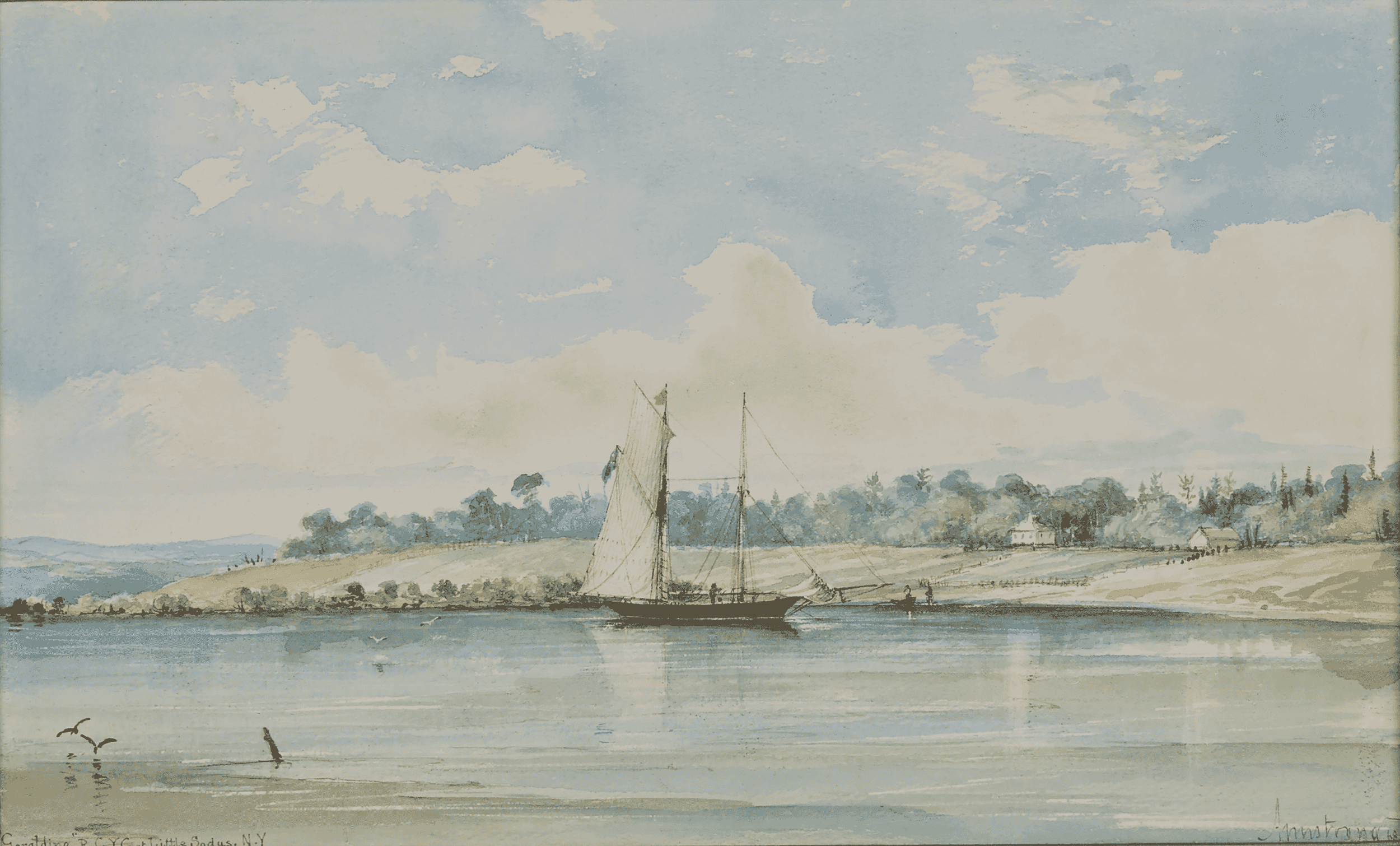 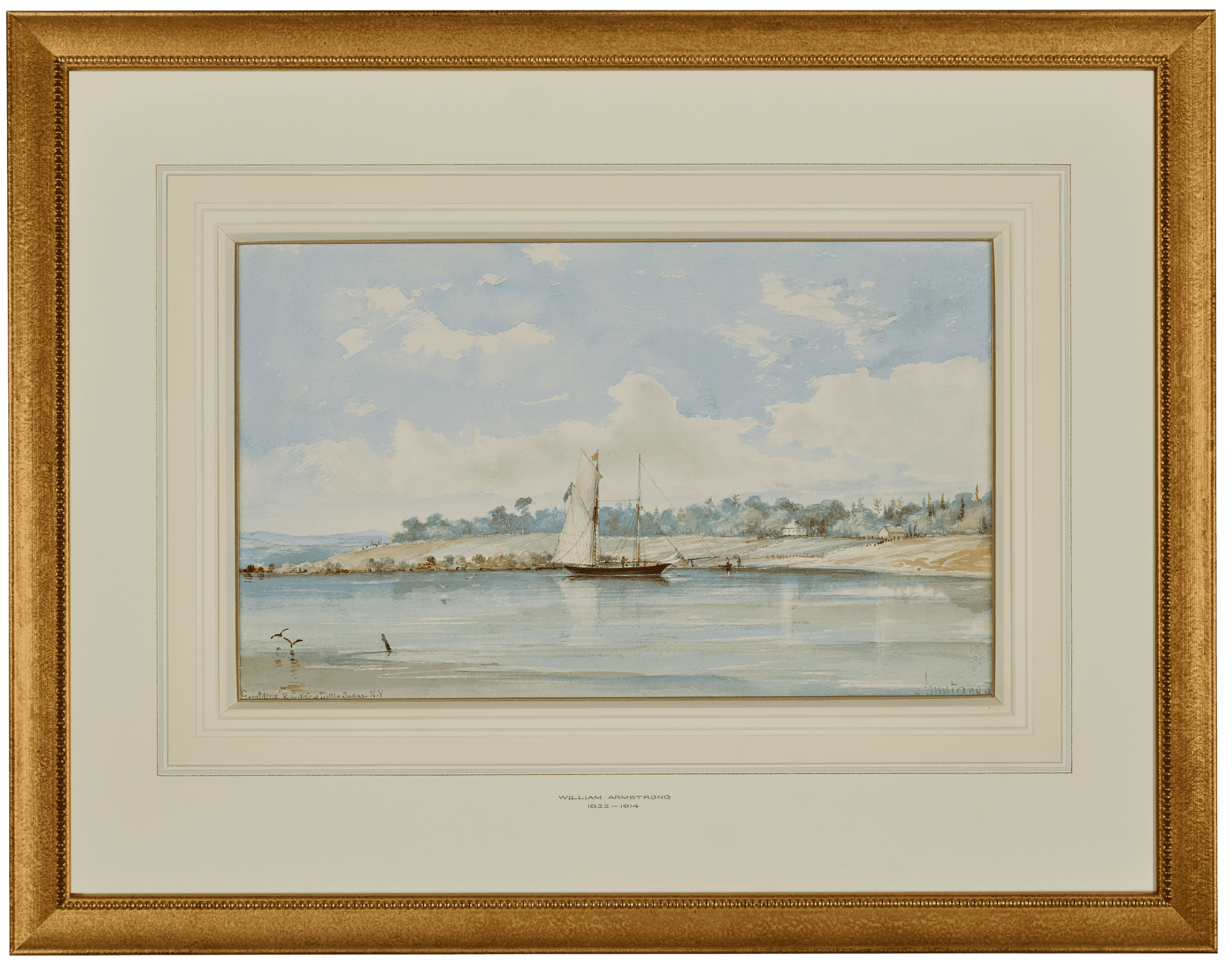 William Armstrong first made a name for himself as a civil engineer – as his work on some of Canada’s early railways attests – and as a pioneer in the use of photography for industrial purposes. But is was his art that was to accord him given him a lasting place in Canadian history.

He was born in Dublin, Ireland on 28 July, 1822, and studied art in Ireland before moving to England, where he completed an apprenticeship with the Midland Railway to become a railway engineer.

In 1851 he emigrated to Canada, settling in Toronto, where he began work with the railway. He found a ready market for his artwork with the “Illustrated News” which covered the events in the colonies. His watercolours of local events and scenes were reproduced as monochrome wood engravings so they could be included in these weekly periodicals.

William Armstrong added photography to his many skills and abilities, and in 1855 he started Armstrong and Beere with his nephew Daniel Manders Beere (1833-1909).  Humphrey Lloyd Hime (1833-1903) joined them two years later to form Armstrong, Beere and Hime. The company was responsible for completing a 360 degree panoramic sequence of the City of Toronto in 1856-1857 to support the city's bid to become the capital of Canada. The company ceased operation in 1861.

Armstrong marketed his considerable skill as a draftsman as a valuable asset to those who were motivated and inspired to expand Canada westward.

A trip to Lake Superior in around 1859, close on the heels of his partner Hime’s exploratory trip as part of Henry Youle Hind’s expedition to explore the areas of the Assiniboine and Saskatchewan rivers a year earlier, was to change Armstrong’s life for ever. For here, on the craggy shores of the world’s biggest lake, he found material for a lifetime’s work.

The record of Armstrong’s travels are obscure. It is known for certain that he travelled to Fort William (now the city of Thunder Bay) and its vicinity in 1859, probably for the first time, and he then completed a series of  watercolour sketches which were later presented to His Royal Highness, the Prince of Wales. These sketches are still held today in the Royal Collection at Windsor Castle.

In 1870, Armstrong accompanied the Wolseley Expedition to the Red River Colony, recording the incredible effort required to move the military force through the Canadian wilderness. One of his compositions, Red River Expedition, Purgatory Landing was reproduced as a wood engraving on the cover of the Canadian “Illustrated News” on July 9, 1870 to accompany their coverage of the expedition's progress.

He won numerous prizes as an artist at provincial exhibitions, and his work was displayed at the Exposition Universelle in Paris in 1855, and at the Dublin International Exhibition in 1865. He also exhibited with the Ontario Society of Artists and was a member of the Royal Canadian Academy of Arts until 1887, when he resigned.

In 1864 William Armstrong began to teach drawing at the Toronto Normal School, and from 1872-1877 he taught at the University of Toronto . He retired in 1897 but continued teaching art from his home until his death in Toronto on 9 June 1914.

A number of his watercolour landscapes of the Great Lakes may be found in collections such as the Art Gallery of Ontario, the National Gallery of Canada, and the Thunder Bay Historical Museum.

In 1860 he painted the watercolour The Arrival of the Prince of Wales at Toronto, which hangs in the National Gallery of Canada in Ottawa, Ontario.

The Royal Canadian Yacht Club was founded in 1852, the year after the great race around the Isle of Wight, when the schooner-yacht America won the Squadron Cup, so highly prized by the American nation ever since.

The club from which the yacht club sprang was originally called the Toronto Boat Club, but it was in those days confined to yacht-sailing.  The first meeting to establish the club in Toronto was held at the Western Hotel, situated on Wellington Street, and a large gathering of Toronto men were present, with one of the original founder members of this club being none other other than William Armstrong. He held the position of club secretary for many years.

During the year 1852, and for a year or two after that, it was called the Toronto Yacht Club, and later on, in 1854, by the consent of Her Majesty Queen Victoria, the name was changed to that of the Royal Canadian Yacht Club.

There were quite a number of yachts belonging to the Toronto Boat Club or Yacht Club in the year 1852, namely, the Cherokee, Undine, Storm Queen, Emerald, Rover, Witch, Breeze, and others.

The first race took place under the auspices of the Toronto Boat Club in August, 1852, and the yachts entered were the Undine, Abercorn, America, Jenny Lind, Saucy Jack, and Cherokee.

The Royal Canadian Yacht Club was much encouraged in yacht-racing by the gift of His Royal Highness the Prince of Wales of a very handsome champion cup, which is still today styled the Prince of Wales’s Cup, and sailed for annually, a handsome silver medal being given to the victor each year.

In 1860, when the Prince visited Canada, the then Com­modore of the Royal Canadian Yacht Club read an address to His Royal Highness, which was graciously replied to. He then agreed to become a patron of the club.

The first race for the Prince of Wales’s Cup cup was sailed in 1861, and from that time to the present, with the single exception of 1881, has been raced for every year.

This cup is one that every yacht in the club is entitled to sail for, and as a result there has nearly always been a large fleet of starters, as the Prince of Wales’s Cup is looked upon as being the cup, and in the, hope of winning it and the handsome medal that accompanies it every member who owns a yacht with the faintest pretensions to speed enters her for the race.