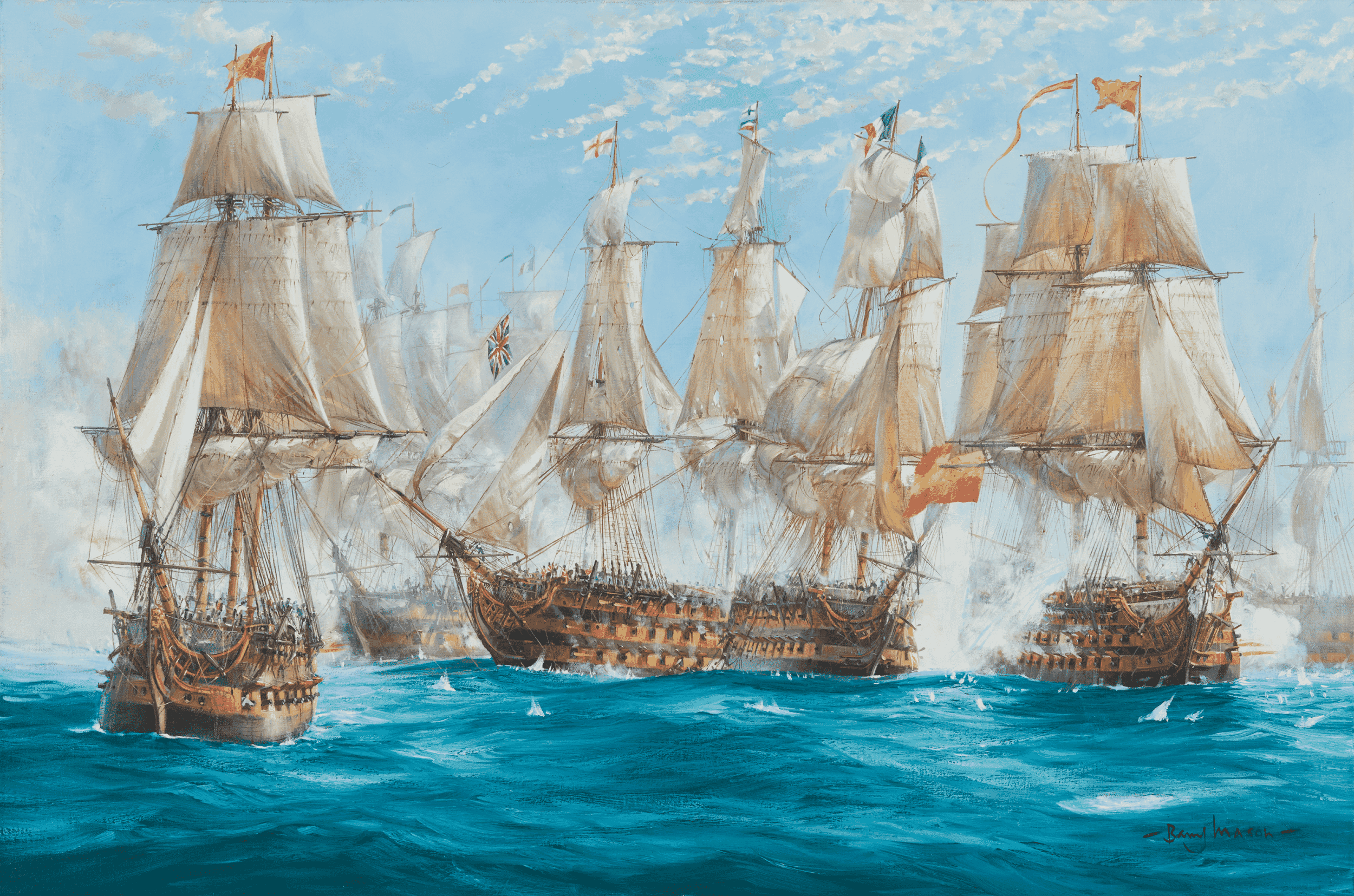 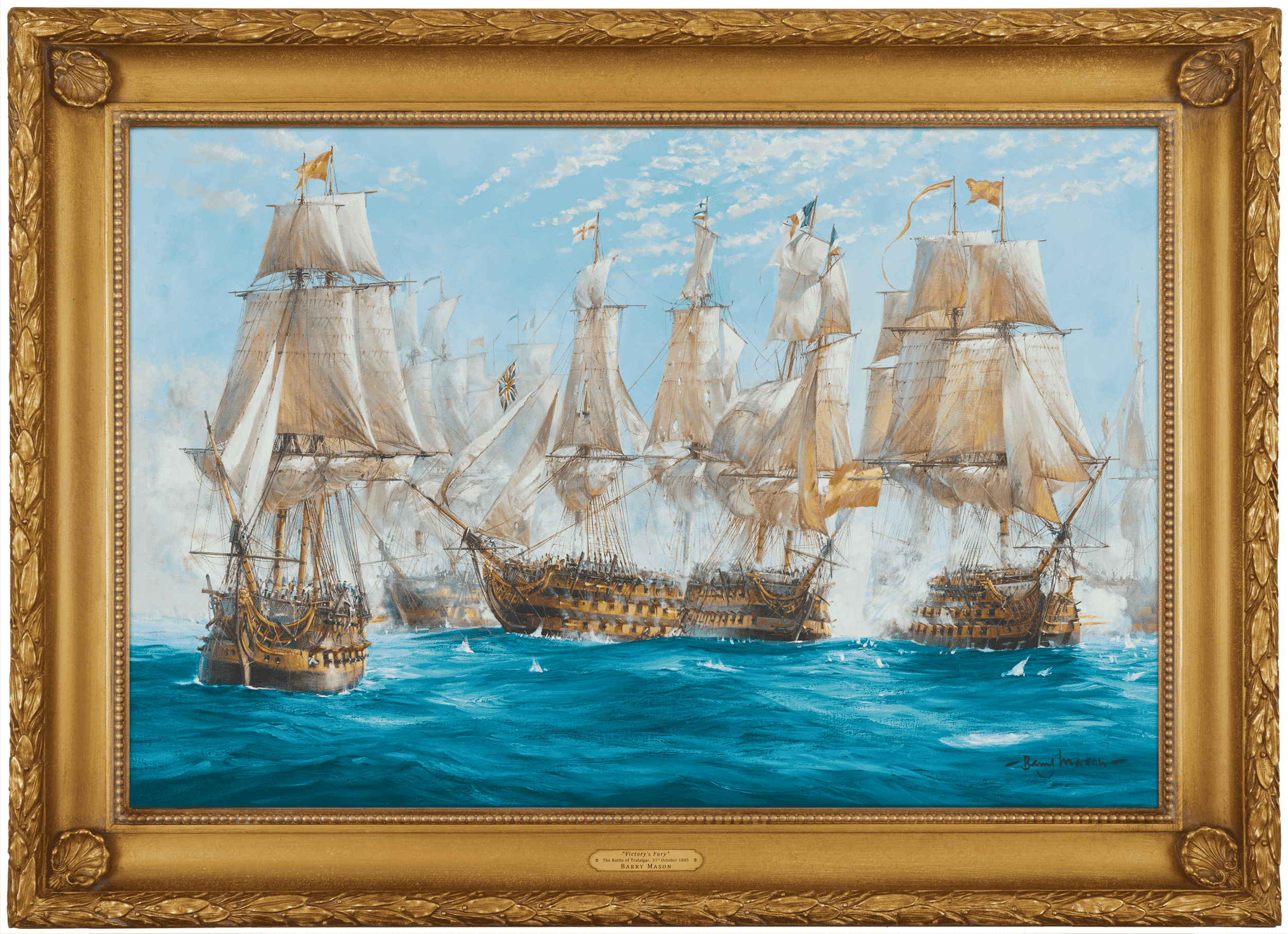 The time is 12.45 p.m. on the 21st October, 1805. H.M.S. Victory has just cut the French and Spanish line astern of the French flagship Bucentaure, and is firing the whole of her port broadside into the unprotected stern galleries of the Frenchman. Her guns, double and triple shotted, create havoc through the decks, reducing Bucentaure to a grisly wreck that takes little part in the further action.

Ahead, the Santisima Trinidad is taking the remnants of Victory’s line whilst her port battery engages the approaching line of English ships.

Off Victory’s starboard bow the Redoutable sheers off, and shortly afterwards Victory rams her bows and the two ships lock together in mortal combat, fighting toe-to-toe, until the smaller Redoutable’s utter destruction.

To leeward of the Spanish flagship, the San Justo keeps out of harm’s way and fires occasionally into any passing ships.  Through the smoke to right, the Temeraire is about to pitch into the fight.

The Battle of Trafalgar, the most decisive victory in naval history, was fought off Cape Trafalgar, 25 miles south of Cadiz on 21st October, 1805. Admiral Lord Nelson had under his command twenty seven ships of the line, against the thirty three in the combined French and Spanish fleets.  Nelson’s brilliant strategy to break the enemy line of battle in two places, a radical departure from the more conventional tactics of the day, proved entirely successful.

Nelson’s Victory broke the line of the Combined Fleet at about 12.30 p.m. on 21st October, 1805. She had been under withering fire from the enemy ships for over half an hour, before returning any meaningful response. However, on breaking the line she fired a broadside of double and triple-shotted guns through the stem of the French Bucentaure, which caused massive destruction and loss of life. Bucentaure bravely carried on fighting for another hour and a half, but eventually struck after receiving broadsides from up to eight English ships.

The Redoutable was raked in the bows by a full starboard broadside from Victory before both ships became locked together. They exchanged broadsides, but the French were no match for the standards of British gunnery, and concentrated more on their sharpshooters, one of whom claimed the life of Nelson. Redoutable eventually surrendered to Victory, but not until after she had suffered massive losses. From the battle itself and the storm that led to her sinking the following day, her casualties totalled 88 per cent, including 75 per cent killed or drowned.

The huge Spanish flagship Santissima Trinidad was the last ship to surrender at 5.30 p.m., thus ending the most momentous battle in naval history. Of the Combined Fleet of 33 ships, 18 were captured. They also suffered over three times as many losses as the British.

H.M.S. Victory, the most famous warship ever built, was laid down at Chatham dockyard in 1759 (the year after Nelson’s birth), and launched on 7th May, 1765.  Her length on the gun-deck was 186 feet with a 52 feet beam and a depth of 21 feet 6 inches. A first rate man o’war carrying 104 guns, she was the fifth vessel of her name in the Royal Navy.

Her first action was as Admiral Keppel’s flagship at an engagement with the French at Ushant on 27th July, 1778.  On 20th October, 1780 she was Lord Hood’s flagship at the relief of Gibraltar.  Victory was also present at the evacuation of Toulon from the 16th to the 22nd December, 1793. She was then Sir John Jervis’s flagship at the Battle of Cape St. Vincent on 14th February, 1797, suffering only slight damage despite her principal role in the action.

Most famously of all she served as Admiral Lord Nelson’s flagship at the Battle of Trafalgar on 21st October, 1805.  Her final active service was as Sir James Saumarez’s flagship in the Baltic from April 1811 until October 1812. She was paid off later that year at Portsmouth, but eleven years later became flagship of the Port Admiral at Portsmouth until 1836, when replaced by H.M.S. Britannia.

Victory was refitted several times during the nineteenth century, and after a complete restoration in 1928, she now lies in dry dock as the centrepiece of Portsmouth dockyard.