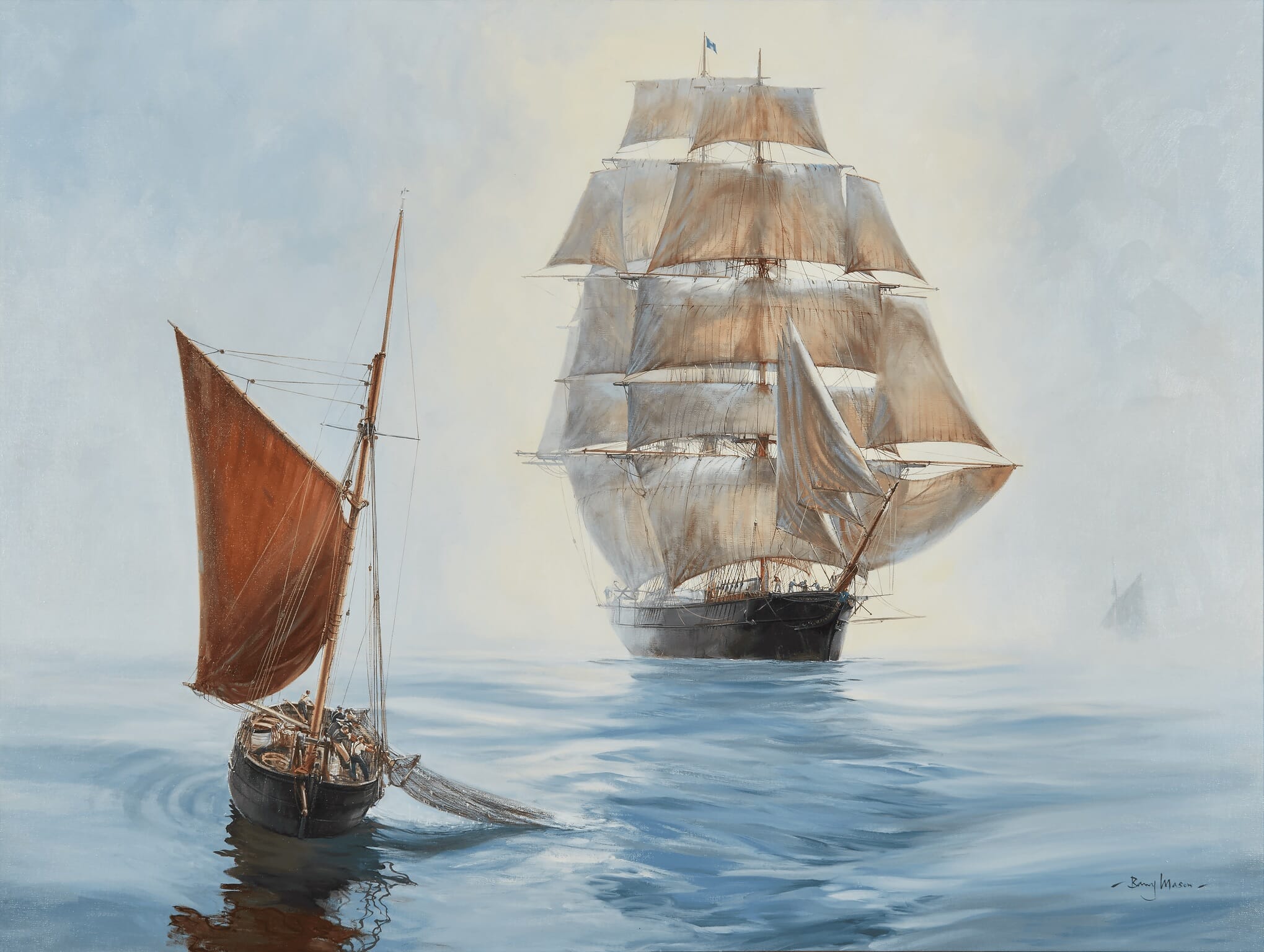 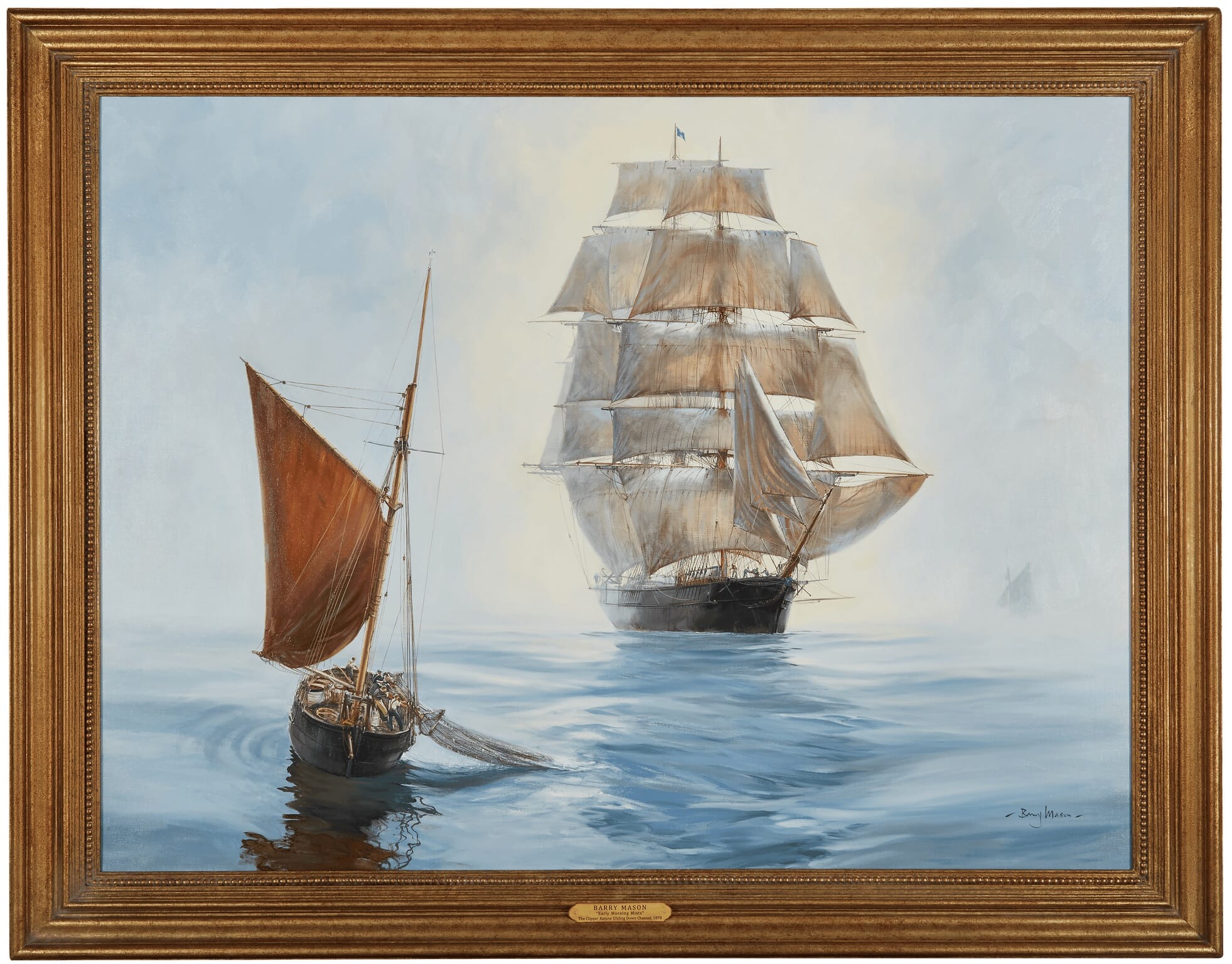 The composite three masted tea clipper Kaisow was built at the Cartsburn yard of Robert Steele & Co. of Greenock in 1868 and launched on 19 November that same year.

Kaisow's first owner was Alexander Rodger of Glasgow who registered her on 9 December 1868.

She became famous as a tea clipper and took part in the Great Tea Race of 1869, under Captain Anderson. She departed London on 1 December 1869, arriving at Shanghai 99 days later on 10 March.

Between 1870 and 1875 she is recorded as having traded between England, Chile, China, Hong Kong, Japan and the Philippines carrying various cargoes including tea, sugar and manganese ore, and in 1875 she was sold to Killick Martin, gaining a new Captain (Gadd) the following year.

In 1878 she was barque rigged. She continued to ply her trade all over the Far East until April 1885, when she was sold to William Bowen Jr. of Llanelly, Carmathenshire.

She was now put to work on the Liverpool run to South America, calling at Coquimbo and Valparaiso, and between May and July of 1890 she carried a cargo of 1196 tons of manganese ore from Coquimbo to Liverpool in 67 days.

Kaisow's final year was in 1891, when on 15 November she foundered and was abandoned 60 miles West South West of Valparaiso on a voyage from Coquimbo to Great Britain after her cargo of manganese ore had shifted.

A transcription of a Board of Trade Wreck Report for Kaisow in 1891 reads as follows:

"The Court, pursuant to an order from Her Britannic Majesty's Consul-General at Valparaiso, proceeded to investigate the cause and manner of the abandonment at sea of the British barque Kaisow of London, official No. 60,392, and having deliberately weighed and considered the evidence and observations preferred by the master, officers, and crew of the vessel, The Court finds:-

That the Kaisow, a composite barque of 795 tons register (re-classed in 1887 for 13 years, A 1 Lloyd's, London), sailed from Valparaiso at 5 p.m. on the 14th day of the present month of November, with a cargo of about 1,170 tons of manganese ore, bound for the United Kingdom, and was abandoned at sea at about 60 miles west-south-west of Valparaiso, in a sinking and unmanageable condition at 5 a.m. on the 15th instant.

That from the evidence adduced, the Court is of opinion that the vessel was in a thorough seaworthy condition at the time of her departure from this port, and that the cargo was stowed in the proper and customary manner.

That at 2 a.m. on the 15th instant, the ship, being under topsails and foresail, was struck by a heavy sea, which hove the vessel on her beam ends, and which must have caused the cargo to shift to starboard.

That efforts were made to righten the vessel by putting her before the wind, but without success. That as the ship was rapidly filling with water, the master and crew were constrained to take to the lifeboat and abandon the vessel; that the vessel disappeared shortly after. That no lives were lost.

That the master and crew succeeded in reaching land a few miles south of the River Limari on the 16th instant, whence they proceeded to Tongoi on the following day, arriving there at noon on the 18th.

Further, the Court is of opinion that the master did all in his power to save the vessel, and that he was justified in abandoning her when he did.

Therefore the Court has pleasure in returning to Mr. William Davies, the master, his certificate, and doth recommend that Mr. Arthur Woodley, the mate, be supplied with duplicates of his certificates which were lost with the vessel."