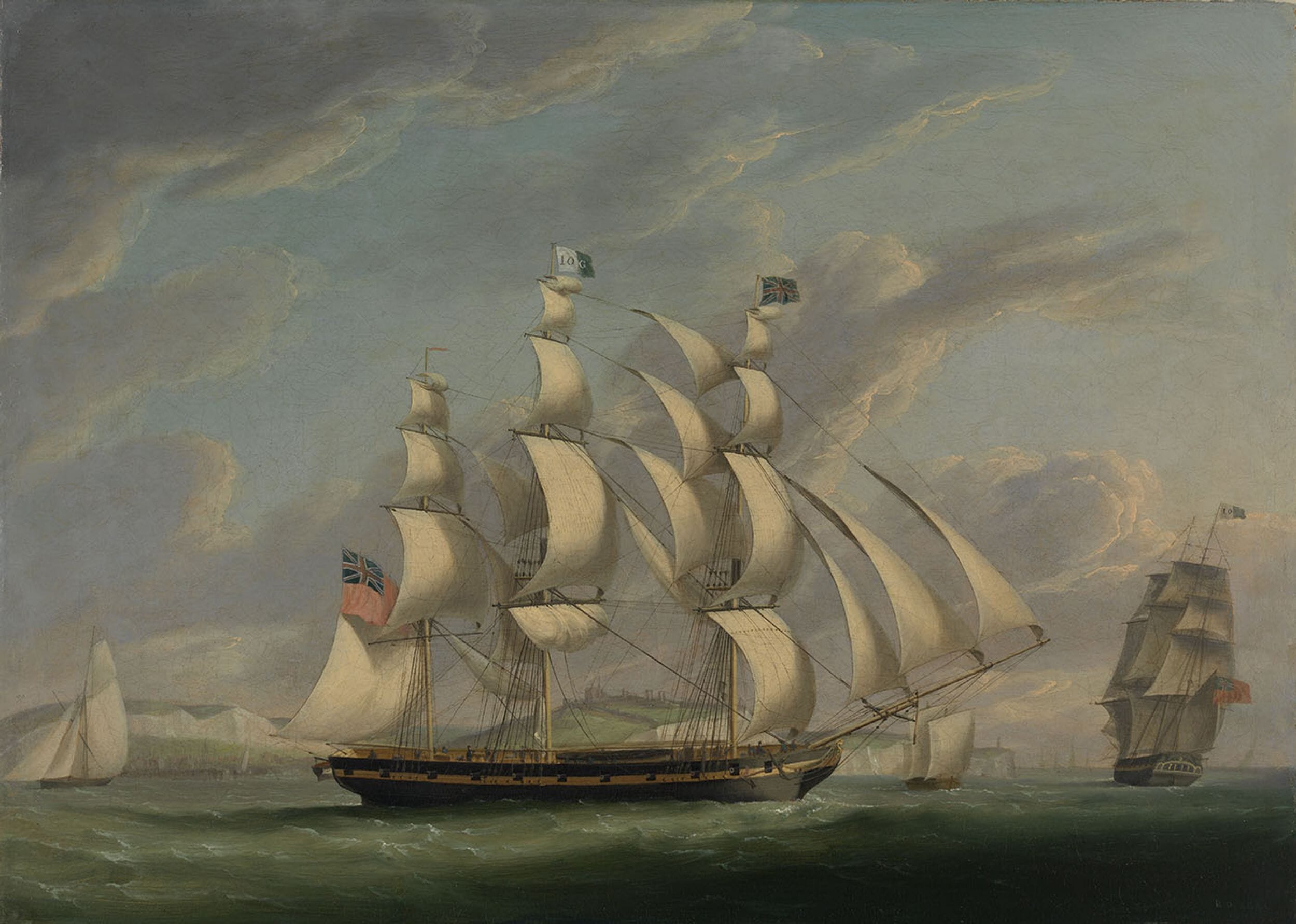 “Off Dover, The Merchantman John O'Gaunt in Two Positions”

Robert Dodd was born in 1748 in London. His younger brother Ralph was also a marine painter, though not as well regarded as his brother. As a youngster Robert is known to have worked in Wapping, as well as in a government dockyard. The year 1771 saw him painting landscapes, but shortly thereafter he started to produce maritime scenes. He was soon to become recognized as of the finest marine painters of naval battles of the French Revolutionary Wars and the American War of Independence. In 1780 he started to exhibit in London, first at the Society of Artists, and then in 1782 at the Royal Academy, where he was to show a total of 48 pictures.

After 1782 he started to produce aquatints of his own work, through which he found a broader market. His reputation grew rapidly with commissions from the Royal Family and in 1789 he published an important set of six dockyard views, these showing Blackwall, Deptford, Chatham, Woolwich, Plymouth and Portsmouth. Robert Dodd finally retired after a successful career as an artist, and on 20 February 1815 he died in London.

Robert Dodd is represented by paintings in the National Maritime Museum at Greenwich, the New York Historical Society, the Mystic Seaport Museum in Connecticut, and the U.S. Naval Academy Museum at Annapolis, Maryland.

Built by John Brockbank of Lancaster for the local firm of Worswick and Company, the fully rigged ship John O'Gaunt was launched from the Brockbank yard on 29 June 1809. Weighing 455 tons and pierced for twenty guns she was meant for trade to Barbados and Martinique in the Carribean. She was to make several successful passages before her demise in the year 1813. She formed part of a West India convoy, together with three other vessels under the escort of H.M.S.Queen, a 2nd Rater. which at the start of December had left Portsmouth.

On 2 December a severe gale dispersed the convoy. Just three days later while in the Bay of Biscay, John O'Gaunt, under Captain Inglis, together with the other three vessels was captured and fired by French frigate La Clorinde, with her 44 guns. Typically, the hapless crews of all four fired ships were assembled on another previously captured British vessel which the French decided with typical magnanimity to scuttle.

It was indeed fortunate that this disgraceful incident was sighted by an English cruiser, with the result that more than one hundred men were rescued, including  the crew and master of the John O'Gaunt, who were then safely returned to Plymouth. Just eleven weeks later the Royal Navy was to exact its revenge. On 25 February La Clorinde was trying to return to Brest, when it was engaged and dismasted by the newly built frigate H.M.S. Eurotas, with its armament of 38 guns. The following day at 1.35pm., with the help of H.M.S. Achates and H.M.S. Dryad, the Clorinde was added to the Royal Navy.