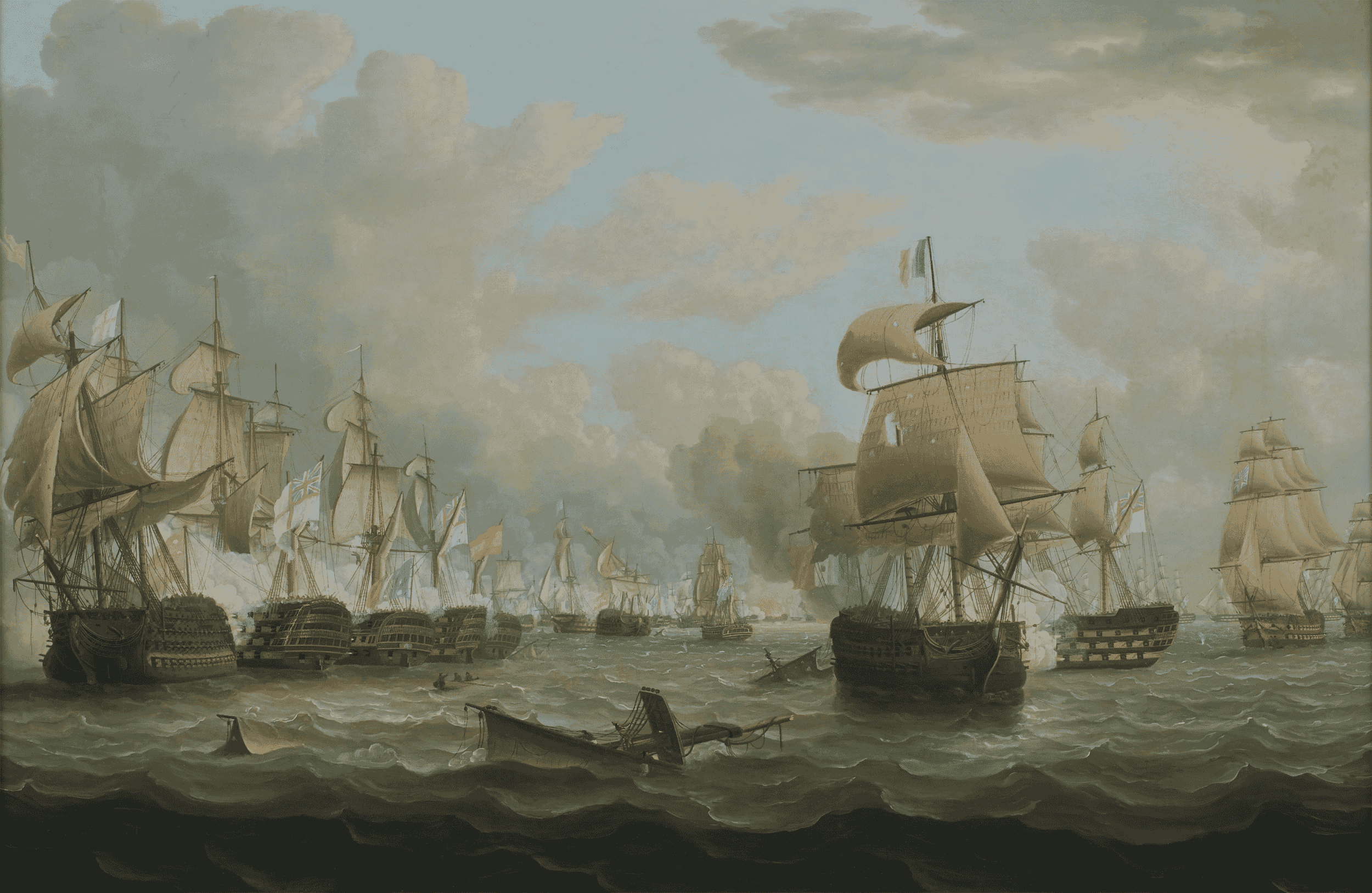 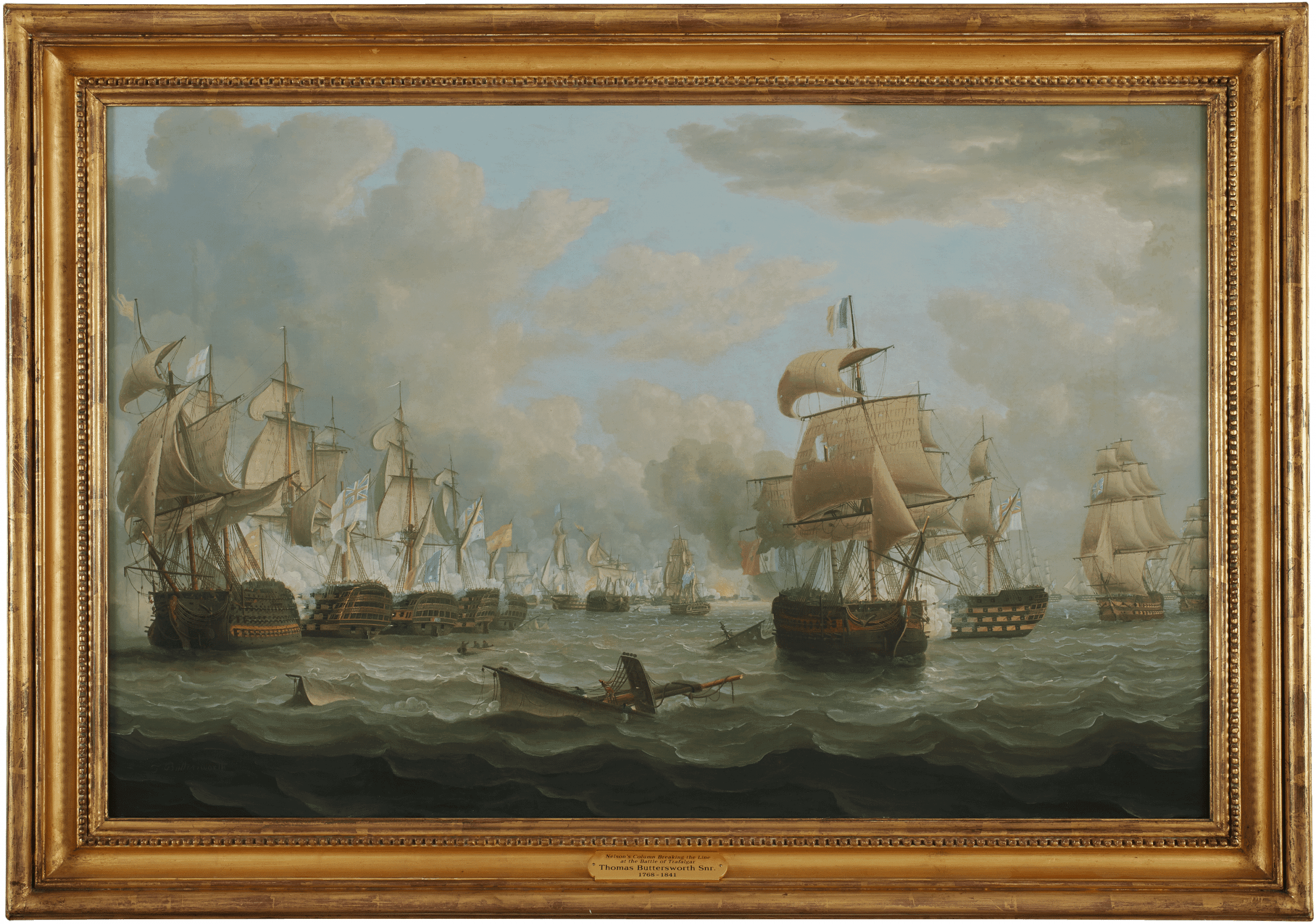 Thomas Buttersworth Senior was born in 1766 and baptised in 1768 on the Isle of Wight. Joining the Royal Navy in 1795 he served just two days aboard H.M.S. Enterprise before enlisting as Able Seaman aboard H.M.S. Caroline at Deptford on the River Thames.

In November 1795 he was appointed master-at-arms, five years later gaining the rank of Midshipman. Later that year whilst at Minorca he was unfortunately invalided out of the Royal Navy and returned home to England.  His time at sea however was not spent in vain, as his various experiences were to furnish his restless and artistic mind with plenty of valuable material for his canvases, and it is a widely held belief that his large collection of watercolours held by the National Maritime Museum at Greenwich - these depicting the Battle of Cape St. Vincent in 1797, together with other subjects of Mediterranean topography - were actually painted by him on location.

His son Thomas Junior, who was born in 1807, also became celebrated as a marine painter, working in a very similar style to that of his father. Thomas Senior's other son James Edward Buttersworth, born in 1817, was to become one of the most recognised and feted marine painters in America, after emigrating to New York in the middle of the 19th century.

Retiring from the Royal Navy, Thomas Senior spent the remainder of his life in London, where he is recorded at several addresses in South London. He exhibited just one work at the Royal Academy in 1813, a maritime painting of Portuguese interest entitled "The Ville de Paris off the Tagus". One of his favourite subjects was the instantly identifiable Belem Tower at the mouth of the River Tagus, which gives credence to the theory that he must have travelled to Lisbon at least once to gain inspiration and artistic perspective. In 1825 the British Institution displayed his exhibit entitled  "The Battle of Trafalgar", and in 1827 the Royal Society of British Artists exhibited a work by him entitled "Leith Pier, With the Royal Yacht George in the Roads".

Thomas Buttersworth died in 1841. Today his work may be seen in leading maritime collections throughout the world, as well as the following galleries and museums: The Royal Naval Museum at Portsmouth, the Plymouth City Art Gallery, and American institutions such as the Peabody Essex Museum in Salem, Massachusetts, the Penobscot Marine Museum in Searsport, Maine, and the Mariners Museum in Newport News, Virginia. He is also represented in museums as far afield as Sydney and Venice.

The Battle of Trafalgar has been referred to as "The Naval Battle That Changed the World". Admiral Lord Nelson in the ship Victory split the English fleet into two parallel attack lines, which faced the mighty combined fleet of the French and the Spanish. Nelson's intention was to force through the enemy line at two different points.

The scene shown in this nautical painting depicts the Victory  on the left hand side, having broken the line and surrounded by Spanish and French ships. The right hand side of the painting shows the ships which followed the Victory, namely the Temeraire, Neptune and Leviathan, engaging a vessel of the French fleet. The background shows the Royal Sovereign surrounded by action.

ONE OF A PAIR