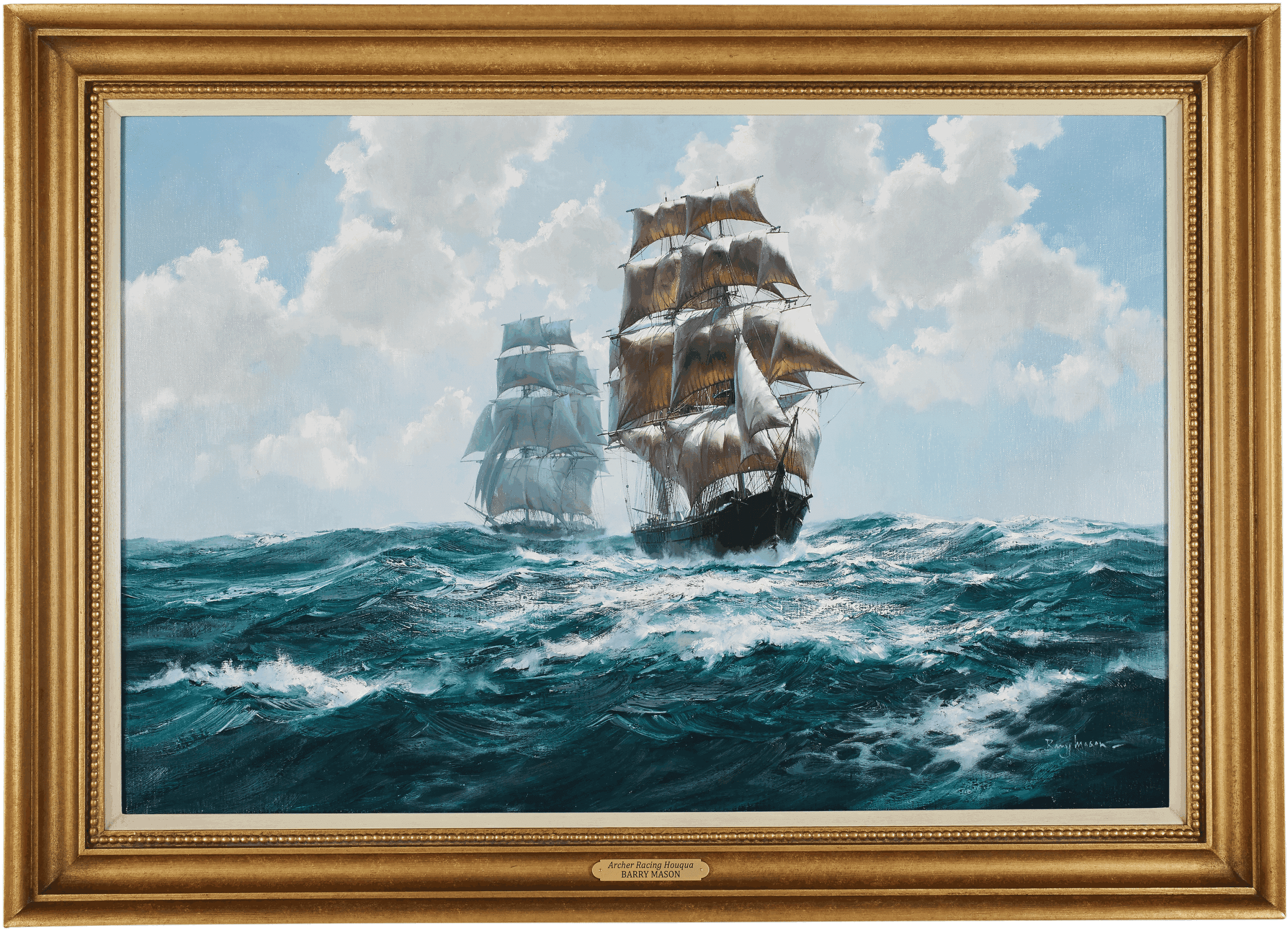 Barry Mason was born at Seaton in Devon in 1947. One of the most talented and recognisable marine artists working in Great Britain today, he studied painting at the Exeter College of Art, before turning full-time to professional marine painting. In the 1970's and 1980's he was a regular exhibitor at the Royal Society of Marine Artists in London, and his one man shows in both London and Stockholm were completely sold out.

His work is typified by marvellous attention to detail, his works full of light, atmosphere and drama. Barry encompasses a wide variety of subjects, from the majestic clippers of the 19th century racing each other on the high seas to bustling and evocative scenes set on the River Thames, from dramatic naval battles of the Napoleonic era and the American War of 1812 to shipping becalmed at moonlight.

He is vocationally a deep sea fisherman, and it is this innate understanding of and sensitivity towards the ever changing and restless nature of both sea and sky which infuse his works with so much accuracy and depth of feeling. He is also fortunate to own an extensive nautical reference library, so that he is able to satisfy his own meticulous need for complete accuracy in researching every detail of his work.

His output is by any standards small and select, and he remains uncompromising throughout. His own severest critic, he will only ever allow collectors those paintings with which he is fully satisfied.

Barry Mason's following is truly international and he is represented today in many private art collections all over Europe and the United States, and as far afield as Australia and New Zealand.

The clipper ship Archer was launched on 29 December 1852 by James M.Hood for Crocker & Warren of New York. Her tonnage was 1,095 old and 905 new measurement, with dimensions of 176 x 37 x 21.5 feet. In May 1862 she was sold at New York to William Perkins of Boston, where she was taken for extensive repairs and a thorough overhaul, reputed to have cost the then enormous sum of $25,000 Dollars. She was later reported to be owned by Samuel G.Reed of Boston, who sold her for $12,000 to a Captain Crossman in 1876.

The Archer  was renowned for her speed. Between 1853 and 1872 she made eleven passages from New York or Boston to San Francisco, averaging 118 days.  In 1854 on her second run from New York to San Francisco, 106 days, the Archer was beaten by Flying Cloud, 17 days. The Archer left New York 8 days before Flying Cloud, but the latter had more favourable winds and overhauled the Archer off the Horn. Both crossed the line in the Pacific the same day, but Archer was two degrees further west and ran into light winds and calms, while Flying Cloud, favoured by fine trades and good winds, was but 14.5 days to port against Archer's 23 days. On this passage the Flying Cloud's time was 89 days and 8 hours, the fastest on record from any Eastern port to San Francisco. Eight years later, Captain Cressey, then in Flying Cloud commanded Archer.

The Archer suffered many mishaps during her career. In 1865 she was put on a sand bar in the River Min by her Chinese pilot, in 1866 she was struck by a hurricane whilst en route from Foo Chow to New York, and in the same year just after leaving New York she was struck by a heavy gale lasting two days. Finally in February 1880 the Archer foundered at sea while on a passage from New York to Havre, Captain Harris and his crew having been rescued by the steamer Naworth Castle. She duly sank.

The Houqua is classed as a clipper ship, even though she was built for sale to the Chinese Government as a war vessel, having eight gun ports on each side. On first arriving in China she was deemed too small for her original intention, and she subsequently operated for her whole career as a merchantman for the firm of A.A. Low & Brother of New York, for whose account she had been built by Brown & Bell at New York in 1844. Named after the most eminent Cantonese Hong merchant, her tonnage was 581 and she was considered a most handsome vessel.

Her whole life was spent in the China trade, with the exception of two voyages from New York to San Francisco in 1850 and 1853, these passages made in 131 and 144 days respectively. Between 1 July 1844, when she left New York on her first voyage, to 8 January 1850 the Houqua made six rounds between her home port and China, both outward and homeward passages made in excellent time.

Her first commander was the legendary Nathaniel B.Palmer, who was succeeded by his brothers Alexander and Theodore. Voyages five and six were commanded by Captain Charles Porter Law, with the fifth proving momentous. Houqua left New York on 4 November 1847, with the equator being crossed on the 23rd day out. A hurricane struck, she lost all three topgallant masts and the jib-boom, and the ship being hove on beam ends and half full of water was in danger of foundering. Captain Law and his crew finally gained control of her, pumped her dry, and she put into Cajeli on the Island of Bouro.

Houqua, in common with Archer suffered a number of mishaps, including being run down by the ferryboat Tonawanda in New York harbour on 3 February 1853. Houqua sailed from Yokohama on 15 August 1864 bound for New York, and was never heard of again. It is assumed that she foundered in a typhoon.