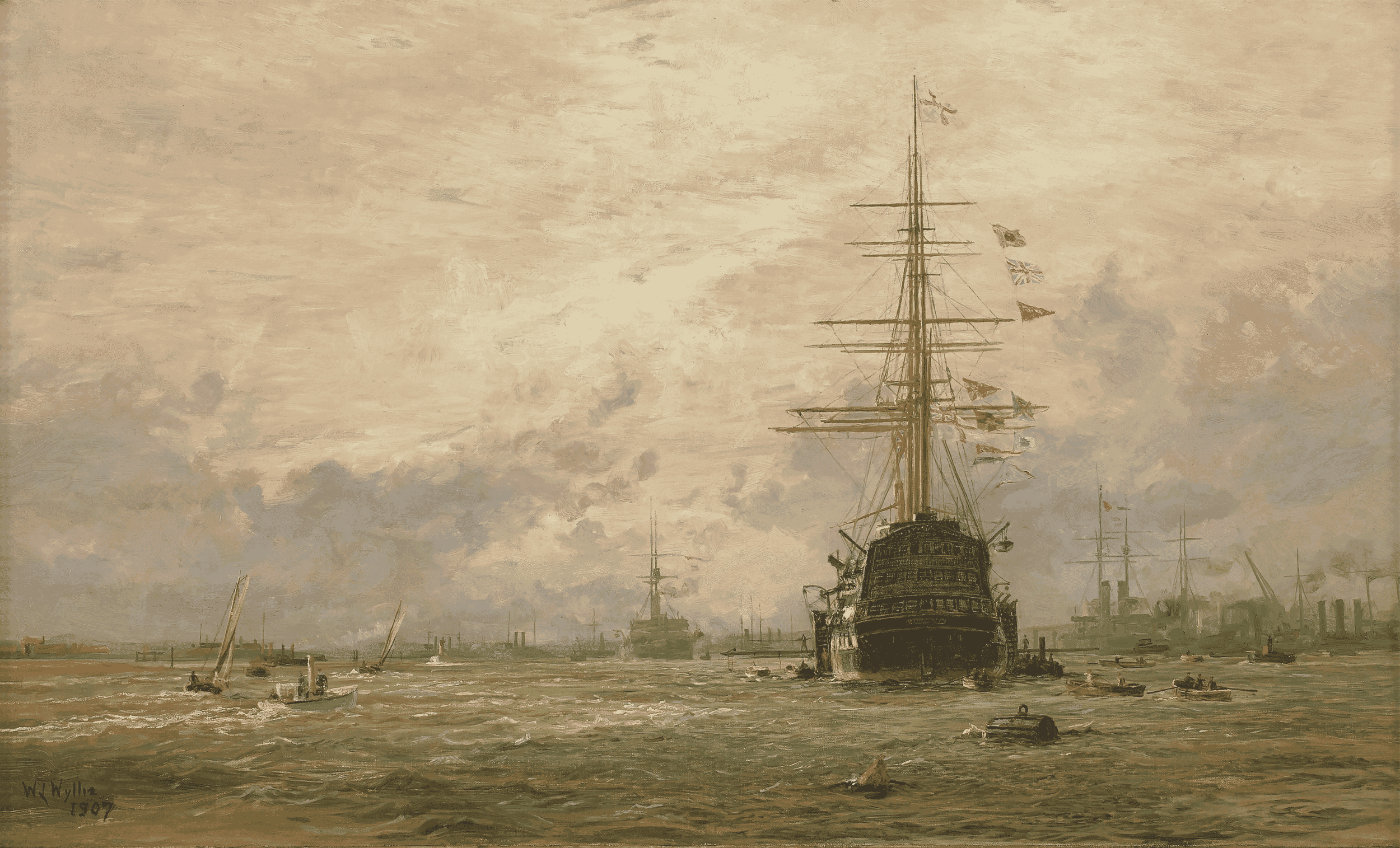 "Signals from the Victory"

William Lionel Wyllie was born in London on 5 July 1851. He was the son of artist William Morison Wyllie and the elder brother of the painter Charles Wyllie. During his youth William Lionel was to spend idyllic summers with his family at Wimereux on the French coast, and it was apparent from an early age that he had a great talent for sketching.

He took up studies at Heatherley's Art School before joining the Royal Academy Schools in 1866. The following year at the tender age of sixteen his first painting was exhibited at the Royal Academy, this entitled "Dover Castle and Town", a finely drawn and atmospheric moonlit painting, and in 1869 he was awarded the Turner Gold medal.
The year 1870 saw him drawing for the 'The Graphic' magazine. At the start of 1880 Wyllie began a series of scenes set on the river Thames and the river Medway, and it was these subjects which began to seal his artistic reputation. In 1882 he gave birth to his most famous work, "Toil, Glitter, Grime and Wealth on a Flowing Tide", a magnificent painting which was purchased for the Chantrey Bequest the following year in 1883.

Wyllie was passionate about the mighty River Thames. Indeed, he owned his own barge, named The Four Brothers, which was gainfully employed as a travelling studio, recording the ever-changing life on the Thames at the busiest time in its history; when tramp steamers, lighters and barges serviced the Port of London. Wyllie's paintings of the river Medway were inspired by the time he lived at Hoo Lodge, where he overlooked both the River Medway and the famous dockyard at Chatham.

The year 1906 marked his purchase of the Tower House at Portsmouth, and it was now through the aid and close friendship of his many cronies at the Admiralty that he was afforded the opportunities to experience the many vagaries of life at sea with the Royal Navy. The following year in 1907 he was elected a Royal Academician. In that same year a whole issue of the Christmas edition of the 'Art Journal' was devoted to him. During World War I Wyllie illustrated two books, namely "Sea Fights of the Great War" and then "More Sea Fights of the Great War".

William Lionel Wyllie was a prolific artist who became famous for working in the mediums of etching and watercolour as well as oils, and when he died in 1931 almost five thousand watercolours from his studio were acquired for National Maritime Museum at Greenwich.