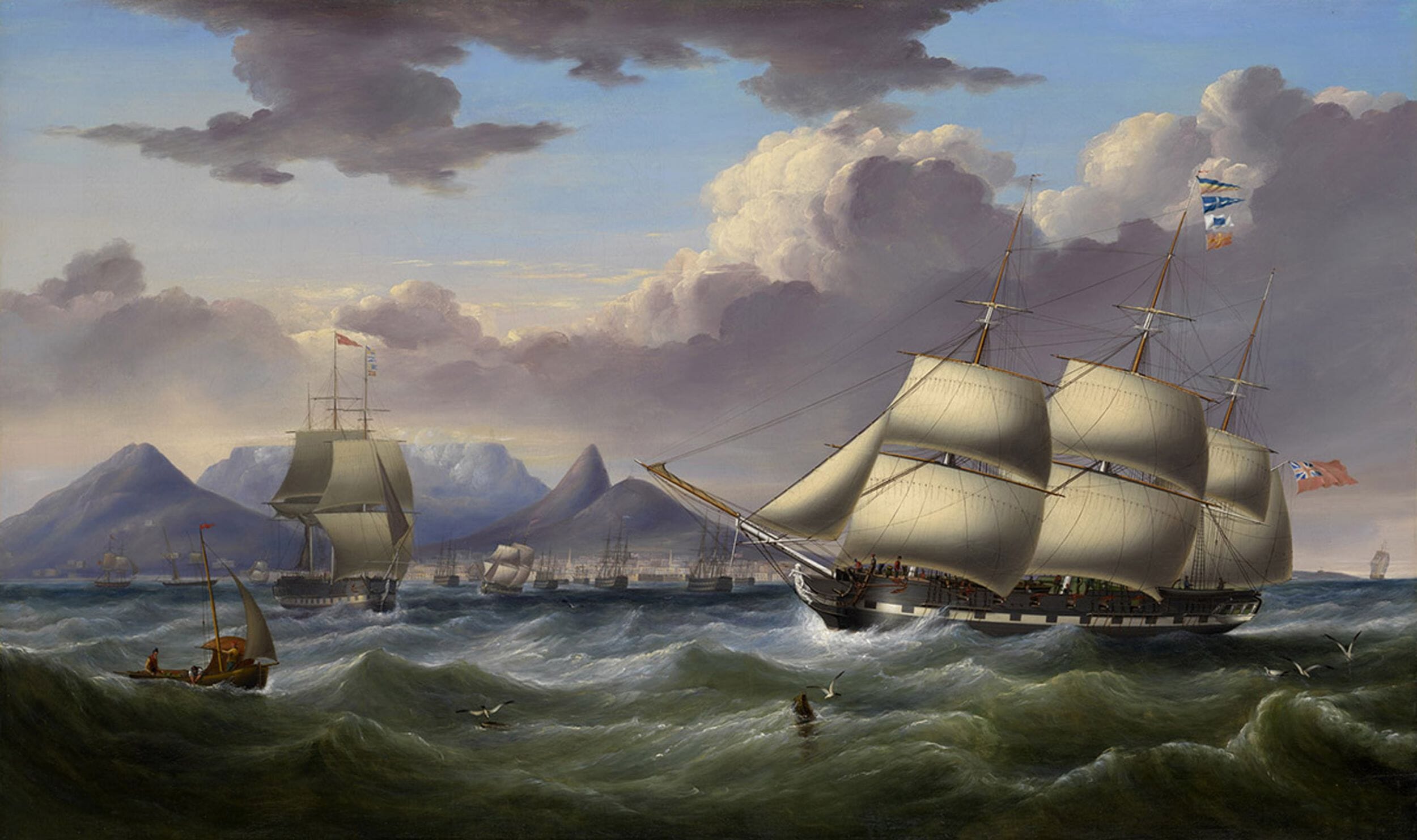 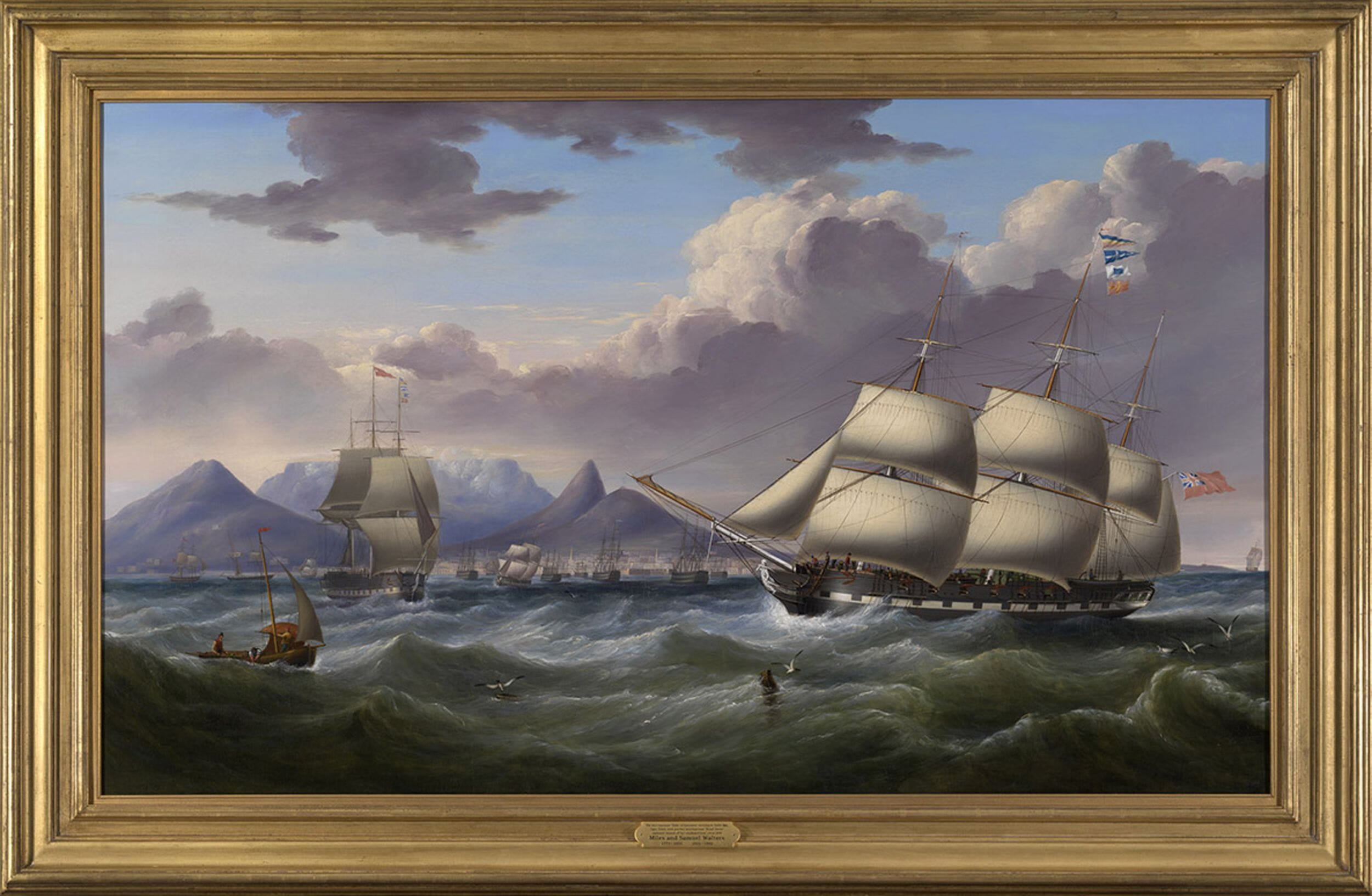 “The Arrival in Table Bay, Capetown of the Merchantman Duke of Lancaster, With the Outward Bound Merchantman Royal Saxon to Starboard”

Miles Walters is recorded as being baptized in Ilfracombe, Devon on 22 May 1774. It is thought that he was apprenticed as a shipwright before he was to serve approximately 13 years in the merchant service. His time at sea was often spent sketching and drawing his maritime experiences, and this in turn led him to him become a ship's portrait painter. He had settled in Bristol by about 1806, and after his marriage in that same year he moved with his wife to London.

Their first son Samuel was born in 1811, and he was destined to become one of the finest marine painters of that century. To add to his income as well as support his family, Miles put his experience and ability as a former shipwright to become a notable frame maker. Between 1822 and 1826 he is known to have lived in London at Edward Street, Limehouse Fields. Miles briefly returned with his family to Plymouth, after the death of his father, before moving on up to Bristol, where he is known to have painted ten local scenes.

The first joint marine painting by Miles and his son Samuel was produced in 1827. For the following 7 years over 70 more collaborations are known, mainly depicting the River Mersey. But it is generally assumed that the Walters family did not finally settle in Liverpool until the late 1820's. In 1831 and 1832 Miles exhibited two paintings at the Liverpool Academy, before retiring from marine painting in the mid 1830's to concentrate his efforts on gilding and framing. Miles Walters died in Liverpool on 7 August 1855. His work is represented today in the Bristol Museum and Art Gallery, the Merseyside Maritime Museum, as well as the Canadian Museum in Saint John, New Brunswick.

Samuel Walters was born in London on 1 November 1811. It was natural that he was to be apprenticed to his gifted father Miles, and together they left London for the bustling port of Liverpool around 1826, with a year's sojourn in Bristol spent en-route. In 1827 they are recorded as having collaborated on their first marine painting, one of circa ninety pictures they were to work on together over the following six years until Miles decided to retire from painting circa 1835. Just after arriving in Liverpool, Samuel joined the Liverpool Mechanics School of Arts, and the Royal Institution in November 1831 which contained the Liverpool Academy Schools.

The year before he had shown his marine painting at the Academy, this entitled "Dutch Boats in a Fresh Breeze". It was the first of almost one hundred nautical paintings shown at the Academy over the next thirty five years, and he was made an Associate Member of the Academy on 7 November 1837. Although he was by now a very well regarded and sought after marine painter, he suddenly resigned from the Academy on 12 August 1845 and returned to London.

He took the same studio as William Huggins, another renowned marine artist whom Samuel had a high regard for, at 105 Leadenhall Street, where the celebrated engraver Edward Duncan also worked. In 1844 Walters had exhibited his first two pictures at the Royal Academy, but his residence in London was not to last, and in 1847 he went back to Liverpool. He soon discovered that his popularity had far from diminished since his absence, but had actually increased.

Samuel Walters had a strong influence on other major Liverpool maritime artists of the day, including Francis Hustwick, Duncan Mcfarlane and father and son William Gaye Yorke and William Howard Yorke. Samuel Walters died on 5 March 1882, and today his works grace most of the world's most important maritime museums.

The fully rigged and strongly built merchantman Duke of Lancaster was built in 1820 in Liverpool for an important local owner, John Gladstone, who was the father of the famous William Gladstone, the future Prime Minister of England. Employed in the Calcutta trade, Duke of Lancaster measured 123.5 feet in length and weighed 565 tons. She had three masters, Captains Morrison, Hannay and Hargreaves, the last being appointed in 1834. Although she is recorded as having also made trips to Bombay, on 27 April 1843, arriving back at Liverpool, her fate was sealed and it was decided to break her up.

Weighing 500 tons, the Royal Saxon, was ordered by Kendall and Co. of Liverpool in 1809. Sold in 1810 to D.Petrie of Liverpool, the destination of her maiden voyage was Java, before she began regular runs to Calcutta. In 1838 she was sold old once more to the London-based R.Towns, who put her to work on the Australia run. Royal Saxon continued on this run up to 1857 when she vanished from the register.