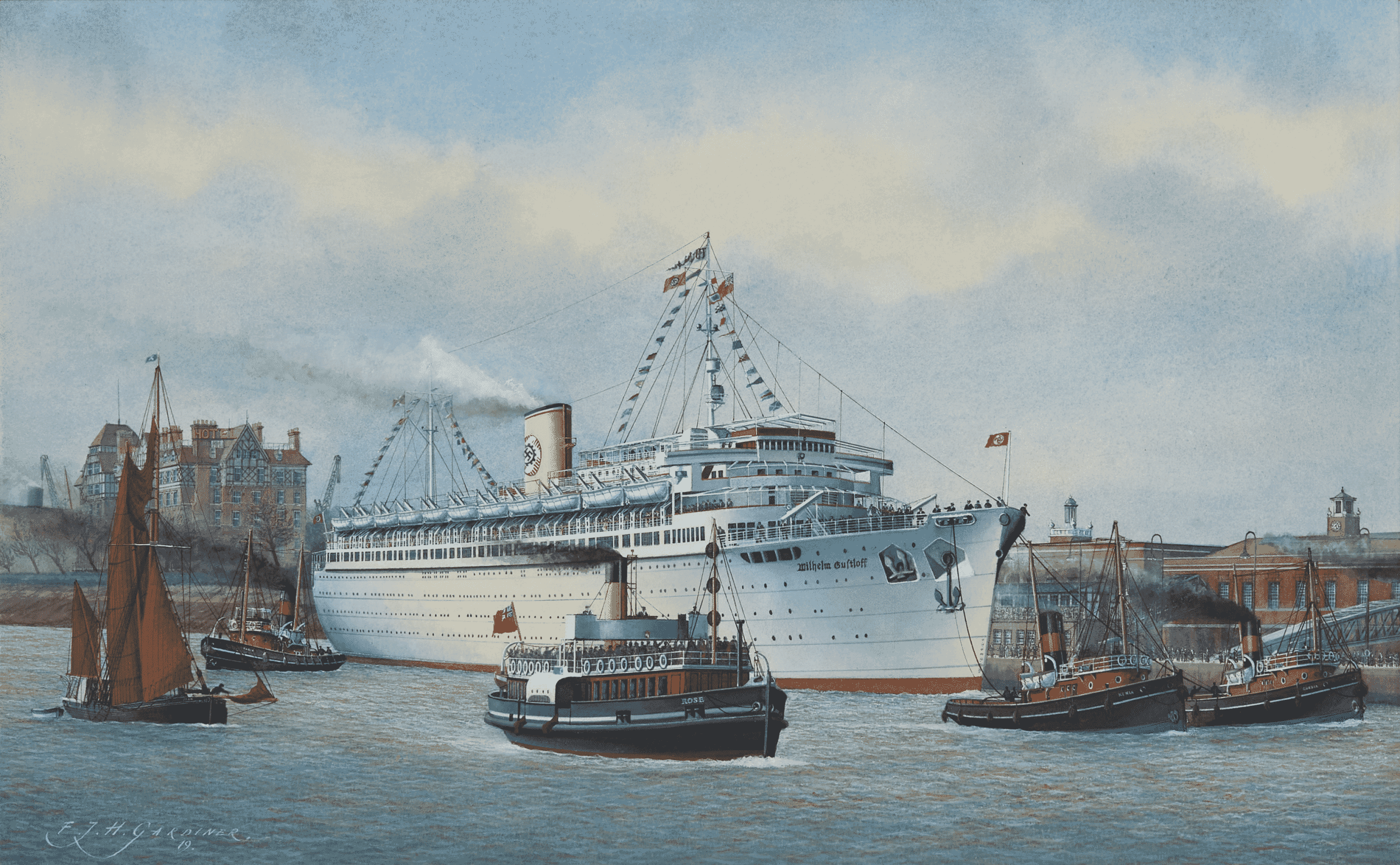 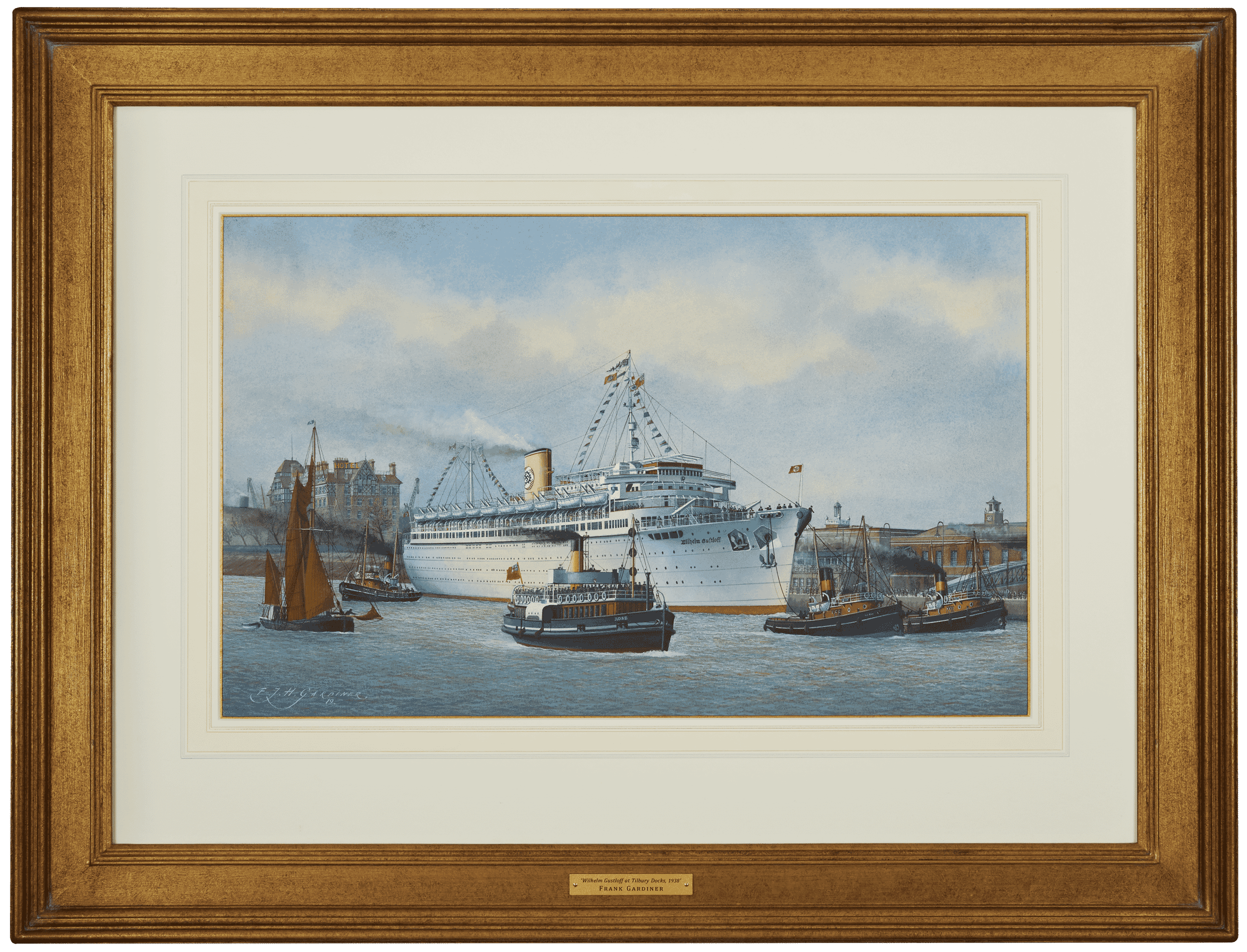 As the dark stain of Nazification spread slowly across Germany and then central Europe in the mid-1930s, there was one aspect of it markedly less sinister than most of the others, namely the ‘Kraft Durch Freude’ (‘Strength Through Joy’) Labour Movement.

Among its stated aims was the improvement of recreational facilities for German workers, most particularly those who belonged to the Nazi party, and its principal method was to offer those men and their families inexpensive single-class sea-going cruises.  Beginning in 1934, the programme started by using passenger ships which had been laid up due to the prevailing ‘Depression’, but such was their success and popularity that, by 1937, two large custom-built cruise liners had been ordered.  Ostensibly owned by the German Workers’ Front, the management was delegated to the Hamburg-South America Shipping Company, and the first ship to be laid down was the ill-fated Wilhelm Gustloff.

The order for her went to the famous Blohm & Voss yard at Hamburg and, unsurprisingly, it was decided to call her the Adolf Hitler. However, even before the keel was laid, the Fuhrer himself decreed that the ship be named the Wilhelm Gustloff, in honour of his friend, the Swiss founder of the Nazi Party organization for German citizens living abroad, who had been assassinated in 1936.

Launched on 5th May 1937, the new liner was registered at 25,484 tons gross and measured 684 feet in length with a 77-foot beam.  With accommodation for 1,465 Tourist class passengers, all of whom had ‘outside’ cabins thanks to her ingenious design, she had no cargo capacity whatsoever so that all those aboard could enjoy the optimum space.

Even though she was only a one-class ship, no expense was spared to fit her out and she became the equal of every other vessel of comparable size then in service.  Completion took almost a year, and it was not until 2nd April 1938 that she sailed on her maiden voyage, a North Sea cruise during which she had the unexpected opportunity for some excellent publicity when she saved the crew of the British cargo steamer Pegaway which she found sinking off Terschelling in atrocious weather.

Then came the final day of the maiden voyage, an extravagantly ‘political’ call at the port of Tilbury, down river from central London.  To the astonishment of the local populace and to the accompaniment of loud martial music from her loud-speaker system, the brand new liner tied up alongside the Cruise Terminal at Tilbury early on the morning of 10th April.

However, rather than disembarking German tourists for a day’s sight-seeing, instead she embarked a significant number of German nationals resident in the UK and simply sailed back out to sea.  When beyond the three-mile territorial limit, her eager day passengers were then invited to cast their votes in the referendum for the Austrian ‘Anschluss’ following the German occupation of Austria the previous month.

Whilst similar arrangements for German ex-patriots were made elsewhere, it is hard to imagine a greater propaganda coup for the Third Reich than this one on Britain’s own doorstep.  Then, having carried out her mission to perfection, she steamed back up to Tilbury, dropped her ‘day trippers’ and set course for Hamburg and home.

In the event, the Wilhelm Gustloff’s cruising career was a short one and was brought to an abrupt end by the general outbreak of hostilities in Europe at the beginning of September 1939. That same month saw her transferred into the German Navy and refitted as a hospital ship but, in reality, there proved so little work for her that, in November 1940, she became an accommodation ship (effectively a floating barracks) based at Gotenhafen (now Gydnia) in Poland, close to the frontier with Russia.

Four routine years followed until, in January 1945, the largely forgotten Wilhelm Gustloff suddenly came to the world’s attention by playing the leading role in what became the worst maritime tragedy in history.

As the Red Army marched inexorably across Poland, it was decided to cram as many German civilians and wounded soldiers into the Wilhelm Gustloff as she could carry and run for the nearest safe harbour. On the morning of 30th January, the ship’s engines were fired up and she put to sea with an almost unbelievable 6,100 persons aboard.

When darkness fell, the evacuees felt safer than they had in daylight, but it was not to be. At 9.06pm, near Stolpmünde (now Ustka), Poland, and without any warning, the hugely overloaded vessel was struck by three torpedoes fired from the Russian submarine S-13 and began to sink.

The German heavy cruiser Admiral Hipper, also laden with refugees, was nearby but broke off any rescue attempt due to the lurking submarine and, just over an hour later, at 10.18pm, the Wilhelm Gustloff capsized and sank.  Various small naval craft and the North German Lloyd steamer Gőttingen managed to pluck 904 persons from the icy waters, but the death toll of 5,200 was truly horrific and remains to this day the world’s greatest maritime disaster.

We would like to thank the eminent maritime historian, Michael Naxton, for his invaluable help and great expertise in researching this fascinating story of the Wilhelm Gustloff.