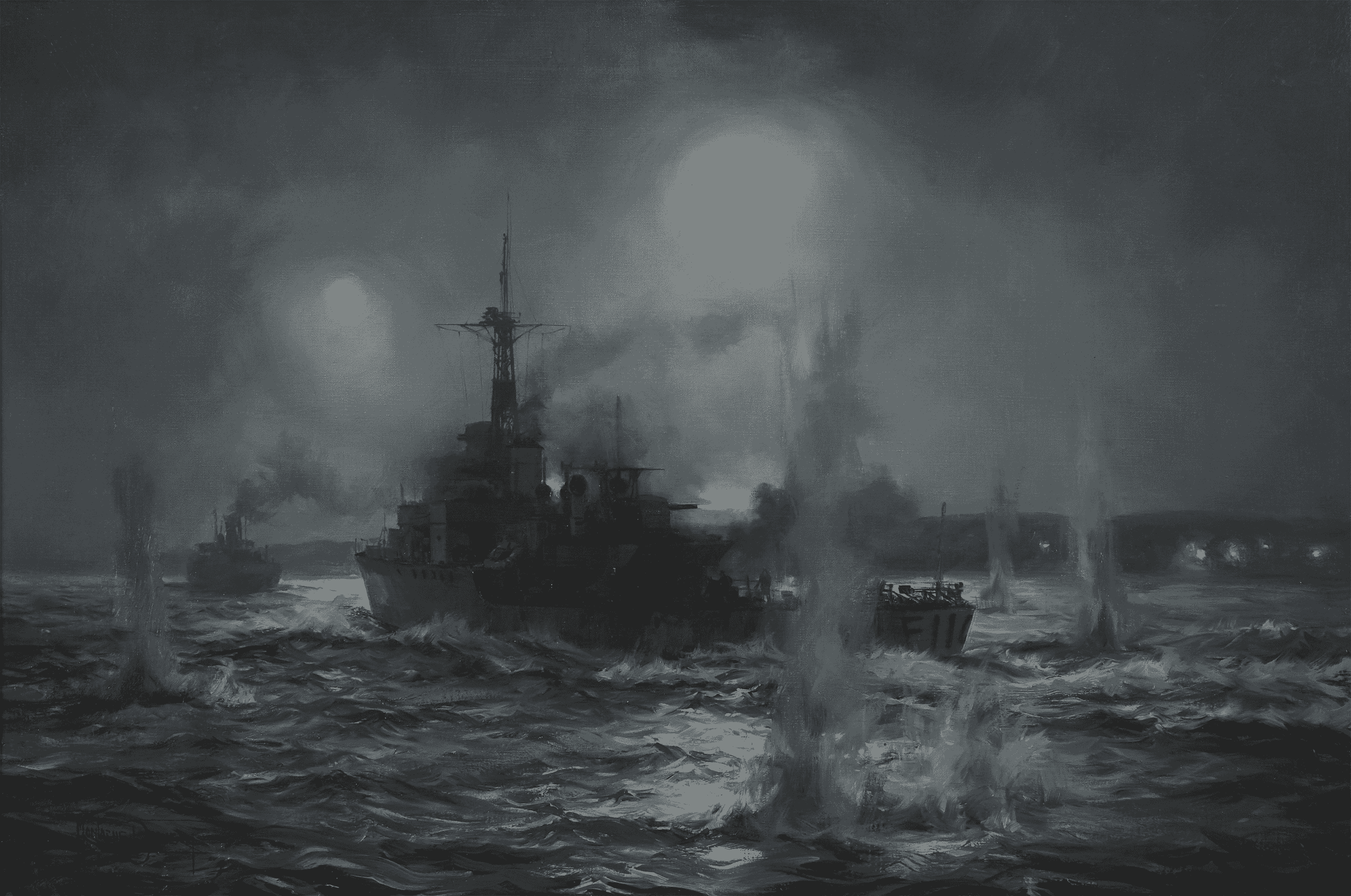 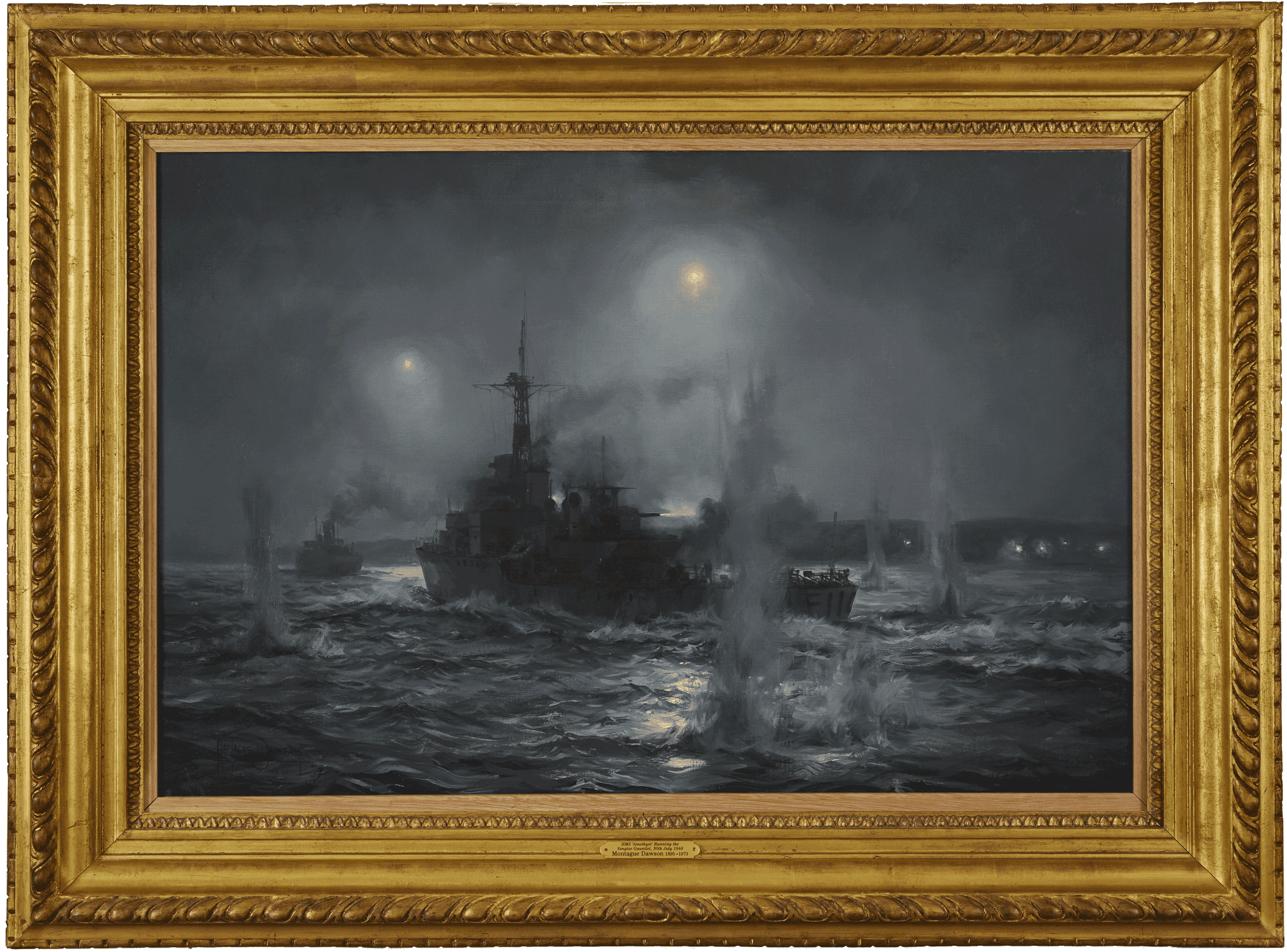 On 20th April 1949, H.M.S. Amethyst, a 1,490 ton frigate with a complement of some 192 officers and ratings was proceeding up the Yangtse River to relieve H.M.S. Consort as Guardship to the British Embassy in Nanking, a journey for which she had full permission from the Chinese authorities. The ship was also taking supplies to the British community and had been ordered to stand by in case an evacuation of British and Commonwealth families from Nanking was required.

At that time there was particularly fierce fighting in the civil war between the Chinese Communist forces north of the river and the Nationalist forces to the south. As Amethyst came opposite Low Island, she came under heavy fire from the Communists. Although Battle Ensigns were ordered to be flown from the foremast and the yard-arms and large canvas Union Jacks were unfurled along the ship's sides for identification, the Amethyst repeatedly took several direct hits.

As a result of her serious condition, Amethyst ran aground about 150 yards off Rose Island, east of Chinkiang. In all she suffered 50 direct hits that day and those holes, dangerously near the waterline, had to be plugged with hammocks, bedding and other materials. Furthermore, this unexpected and unprovoked attack resulted in 17 deaths, with 10 severely wounded and 10 less seriously so. Lieutenant-Commander Bernard Skinner was mortally wounded in the shoulder, side and back. Both the Doctor and his Sick Berth Attendant was killed. Petty Officer Nicholls, Coxswain of the Amethyst, and two colleagues were also wounded by shrapnel, leaving Petty Officer Leslie Frank as the only able-bodied member of the wheelhouse – once he had recovered after being stunned by a shell blast which knocked out several of his teeth.

It was decided that the best plan was to temporarily abandon ship, keeping a working party aboard. The wounded were despatched on the starboard whaler, whilst the others donned lifebelts and swam or paddled on rafts to the shore. More casualties were incurred in the crossing as the Communist fire continued unceasingly. About 50 of the 60 or so who reached the shore eventually made the cross country journey to reach Shanghai, the remainder returned to the ship. Other wounded were evacuated the next day.

In reponse to Amethyst's priority message, H.M.S. Consort proceeded down river to assist but also came under heavy fire, hence was unable to stop on reaching the stricken vessel and had to continue downstream. She had taken 56 hits with 9 killed and 30 wounded in the attempt

Next day, 21 April, attempts were made to re-float the Amethyst which enabled her to proceed a few miles upriver to the Ta Sha South Channel, a reasonably safe anchorage. Here the crew did their best to repair as much damage as possible. H.M.S. London and H.M.S. Black Swan were next to assist, but again the Communist force was too heavy and their attempts were in vain. The London was holed many times with 12 killed and 20 wounded, and Black Swan had seven wounded.

Due to the intensity of the Communist fire it took two days for the Amethyst to embark two doctors and two other officers who had been flown down from Nanking by Sunderland flying boat. One of the officers, Lieutenant-Commander John S. Kerans, Assistant British Naval Attache, took over command of the ship which remained at her anchorage during the summer months, whilst negotiations took place with the Chinese to secure a safe passage for the ship and her company.

Progress was painfully slow as the Communists wanted the British to accept responsibility for the incident by admitting that they had wrongfully and criminally invaded Chinese waters and had been the first to open fire. On one occasion Frank records that he accompanied Lieutenant-Commander Kerans to negotiate with the Chinese.

Life on board the Amethyst during her detention was not a totally isolated existence,. The crew were privy to the sights and sounds of the civil war on land, air and river. They also had contacts with a few local Chinese traders, with whom they were able to barter the ship's stores for some local produce – mainly eggs, potatoes and cabbage. A little reading matter was received from Shanghai as was some very welcome mail. There were few amenities, but they could listen to wireless broadcasts from the B.B.C., Radio Ceylon and Radio Australia. The B.B.C. broadcast two programmes of special musical requests for the detainees, but they were only able to receive the first of these. There were also a few well-run films in the cinema and some physical training equipment.

However, it was not long before conditions on board the Amethyst became critical, and several times in June Frank talks of the situation being grim – food was running short and the crew suffered from mosquitos, cockroaches, rats and ants. Fuel supplies were running low so that this ship's electric fans could not be used to alleviate the stifling heat of the summer and lighting was restricted. They were reduced to hand-pumping water for drinking, washing and flushing the lavatories.

At the end of June and the beginning of July the weather was horrendous, with very high winds and lashing rain – in part the result of Typhoon Gloria which passed close by. "Things" said Frank in his diary "were beginning to get rough". In view of the hopelessness of the situation, Lieutenant-Commander Kerans began to contemplate making a dash for freedom and during the last week of July began to make serious preparations. He decided that 30 July was a favourable night as the moon would soon set after midnight and the swollen state of the river, due to melting snow at its source in Tibet, would hasten the ship's journey as well as provide easier passage over the treacherous sandbanks.

Despite this, there were more serious problems to consider – there was no pilot, the lack of light would make it impossible to recognise shore marks that could give a check on their position, and the dash would have to be done at full speed in order to reach the mouth of the river before light, 140 miles away. To delay much longer would also mean that there would be insufficient fuel to complete the journey. If the dash for freedom failed, the plan was to run the Amethyst aground and blow her up.

Kerans ordered the canvas silhouette screens to be rigged after dark, all white paint to be blackened and grease to be smeared over brasswork. At 22.00 hours the order was given to slip anchor (the ship's cable had been packed with sacking so it could be slipped silently). The initial stages of the dash were complicated by the need to negotiate a 180 degree turn. The Amethyst then began shadowing a Chinese merchantman downstream, when a flare broke over this boat which answered with the usual siren. A second flare revealed the presence of the Amethyst who took a direct hit on the waterline from the Communist shore batteries and keeled over to starboard. Firing back and righting herself, the frigate worked up to full speed, throwing up an enormous bow wave.

In the course of the resultant dash downstream, Frank reports that the Amethyst was unable to avoid "carving through a junk". Amethyst sent a couple of signals reporting the heavy fire and then fell silent. After much anxiety about her fate, a further message was received timed at 02.42 hours, simply stating "Hundred up", indicating that ship and crew were going strong and had completed 100 miles. Then came the now historic signal "Have re-joined the fleet. No damage or casualties. God Save the King!"

The exploit had caught the imagination of the British public at home, so much so that when the Amethyst returned to the United Kingdom she was met by the King and Queen, the two Princesses and the Prime Minister.

Acting coxswain, Petty Officer Leslie Frank, was at the wheel throughout this eight hour drama, during which his skill and courage were prominently displayed. "I do not seem" Frank recorded "to have a very clear recollection of what took place. Lots of orders from the Captain and a hell of a lot of gunfire....but they would have had to blow us out of the water to stop us....more orders, more gunfire all the way down...."

For his crucial part in one of the most sensational episodes in naval post-war history, Petty Officer Leslie Frank was awarded the Distinguished Service Medal. His entry in the "London Gazette" on 1st November 1949 reads: "For outstanding courage and devotion to duty in HMS. Amethyst when she was fired upon by Chinese military forces while she was proceeding to Nanking on 20 April 1949; and subsequently when forced to remain for three months in the Yangtse River under the constant watch of shore batteries, until she made her daring escape down the river on the night of the 30th/31st. July 1949".

Montague Dawson was born at Burlington House in Chiswick, London on 19th September, 1890, the second son and fifth child of Charles Ernest Dawson, a typographic etcher.

Charles Dawson was himself one of six children born to the renowned landscape painter Henry Dawson (1811-1878). Two of his brothers, Henry T. and Alfred, were also accomplished artists in their own right, and so it was hardly a surprise that the young Montague inherited so much of the family talent for art.

The Dawson family moved to Smugglers House on Southampton Water when Montague was still a very young boy, and it was here that the artist developed his innate curiosity and great knowledge of ships. Although he never studied formally at art school, he joined a commercial art studio in 1914, where he was set to work on illustrations and posters.

At the outbreak of the First World War he joined the Royal Navy and was stationed in Falmouth. It was here that he met Charles Napier Hemy R.A. (1841-1917), who had a substantial influence on his work. Dawson also began working for "The Sphere" publication during the summer of 1913, seeing service in trawlers and minesweepers.

It was in the 1920's that he became contracted to Messrs. Frost and Reed, the celebrated Bristol fine art dealers, who from thence handled his entire output as well as his reproduction rights. With their backing and encouragement he became known as the "King of Clipper Ship Painting".

After the war ended he set himself up as a painter and illustrator. By the 1930's Dawson was considered to be one of the greatest living marine artists, and amongst others his paintings were acquired by our Royal Family as well as two American presidents, Dwight D. Eisenhower and Lyndon B. Johnson. During the Second World War he returned to his role of war illustrator for "The Sphere".

As well as his famous paintings of clipper ships and glamorous yachts he also painted a number of famous naval and historical subjects.

Examples of his work can be seen in major marine museums throughout the world.

Montague Dawson died at Midhurst in West Sussex in 1973.

This article can be viewed in full on our "News" page