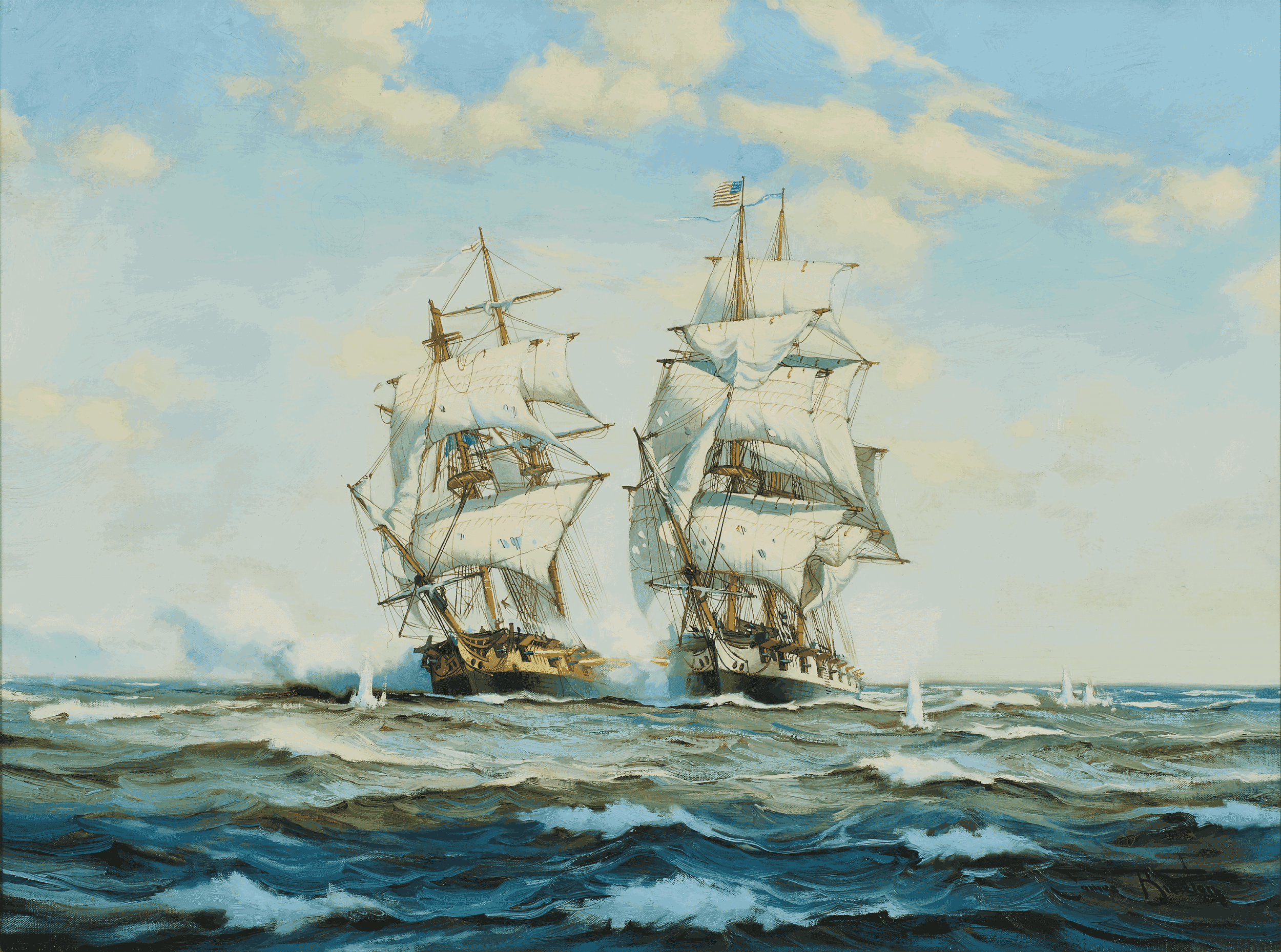 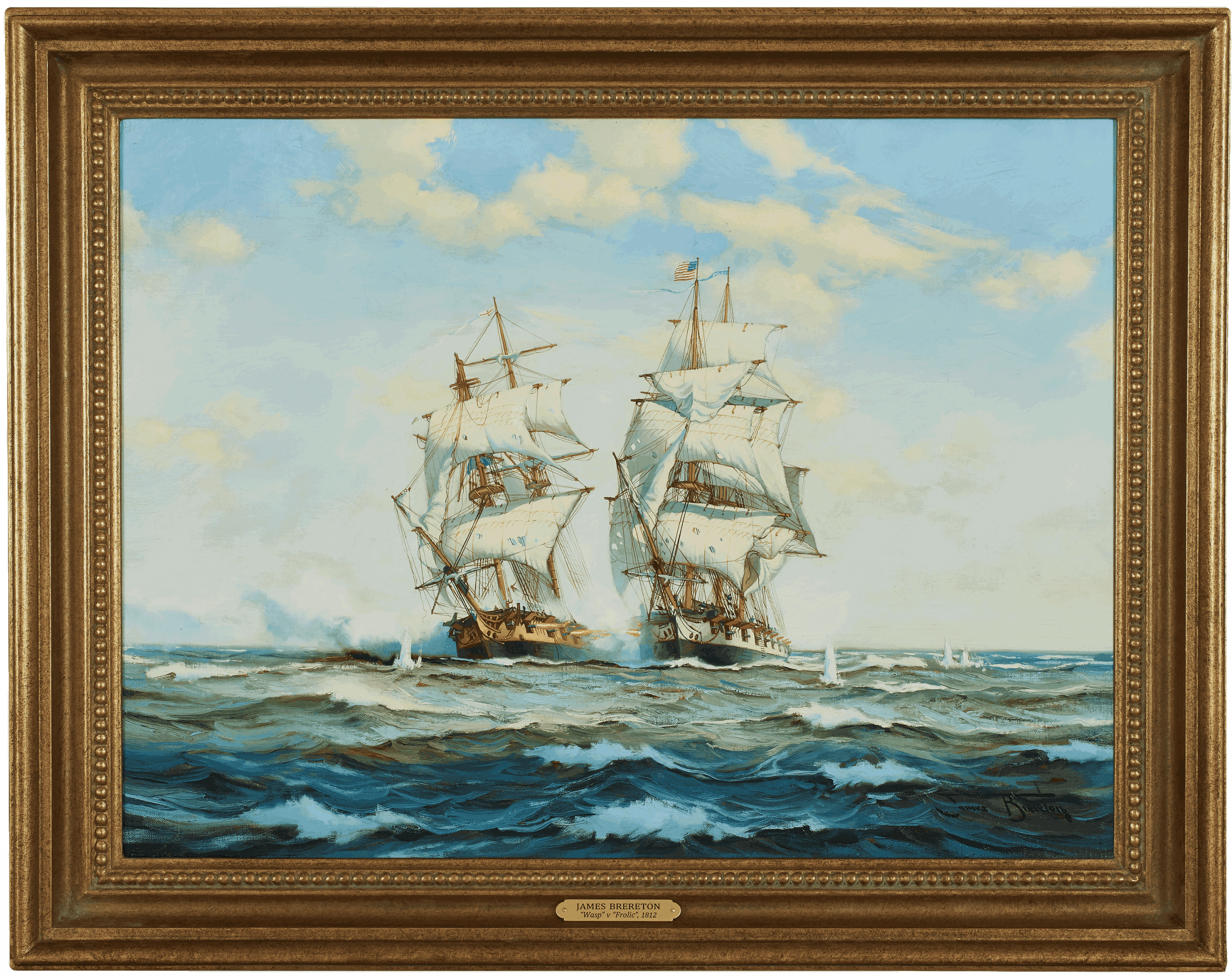 Escorted by the Cruizer class brig-sloop H.M.S. Frolic, a convoy of fourteen British merchant vessels departed the Gulf of Honduras on 12 September 1812, bound for England. Frolic was under the command of Thomas Whinyates.

On 16 October, about 300 miles north of Bermuda, the convoy was scattered by a strong gale. Frolic suffered damage to her rigging, the main yard being carried away. October 17 saw Frolic's crew making good her repairs, and as darkness fell she was re-joined by six of her merchant charges.

Meanwhile, the American sloop of war U.S.S.Wasp had departed the Delaware River on 13 October, running south-east to intercept ships sailing between Great Britain and the West Indies. Wasp had also suffered in the same gale by losing her jib boom. At 11:30 pm on 17 October, the crew of the U.S.S. Wasp alerted their Commander, Jacob Jones, to several vessels sailing downwind to the leeward. The wily Jones stayed his distance until dawn, when he identified them as merchantmen surrounding a Royal Navy brig.

By now the weather had improved, but there was still a strong wind blowing and a fretful sea. Both vessels shortened sail and prepared for action. The crew of Frolic took down the jury mainyard, lashing it tightly to the deck. Since both vessels carried a main armament of short-range carronades, there was no attempt at manoeuvering to gain advantage before the fight; instead, they closed to "within hail", opening fire at 11:30 am, with U.S.S. Wasp to starboard and H.M.S. Frolic positioned to port.

Wasp 's crew fired low into their opponent's hull, whilst Frolic 's gunners fired high into the enemy's rigging in an attempt to destabilise it. The furious action continued, the ships closed, and the American gunners struck Frolic's sides with their rammers.

After just twenty minutes, Wasp 's rigging suffered serious damage, with the main topmast, the mizzen topgallant mast and the gaff being shot away. Virtually every brace was severed, now rendering the ship unmanageable. Frolic suffered even more, with the crew sustaining heavy casualties. Both vessels were now effectively unmanageable. Suddenly,  Frolic collided with Wasp, which now fired a final devastating broadside. The superiority of American gunnery was widely accepted by both sides, although the Americans applauded the courageous fight put up by the British.

At precisely 11:52 am, American sailors boarded H.M.S. Frolic to discover half the crew either dead or wounded and all British officers dead. By contrast, the Americans had suffered just ten casualties.

Just after the fighting ceased, both the Frolic 's masts collapsed. An American prize crew boarded her and attempted to repair her rigging. A few hours later H.M.S. Poictiers hove into view, a British ship of the line commanded by Captain Sir John Beresford. Frolic was still rendered unmanageable, but with its damaged rigging U.S.S. Wasp was soon overtaken and she was forced to surrender in the face of impossible odds. Captain Beresford was expected to join the fleet blockading the American coast, but he now deemed it vital to marshal Frolic 's convoy for safe conduct to Bermuda.

Master Commandant Jacob Jones and his crew were soon to be released in a prisoner exchange. He was subsequently promoted and appointed to the command of U.S.S . Macedonian, which had been captured from the Royal Navy on 25th October. Jones later served as second in command to Commodore Isaac Chauncey, commander of the naval forces on Lake Ontario. H.M.S. Frolic was sadly broken up in November 1813, her severe damage rendering her incapable of ever fighting again, whilst Wasp briefly served in the Royal Navy as H.M.S. Peacock, she in turn being wrecked in 1814.